Safety and efficacy of adding sitagliptin to insulin in patients with type 2 diabetes: The ASSIST-K study

Diverse insulin regimens are employed in clinical practice to treat type 2 diabetes mellitus, because patient characteristics vary. The dipeptidyl peptidase-4 (DPP-4) inhibitor sitagliptin may be given in addition to insulin therapy.
Few studies have examined efficacy and safety of combined treatment [1-4]. This study addressed this issue by performing a retrospective multicenter study enrolling outpatients with T2DM with inadequate glycaemic control despite receiving insulin, who were treated with add-on sitagliptin for at least 6 months. 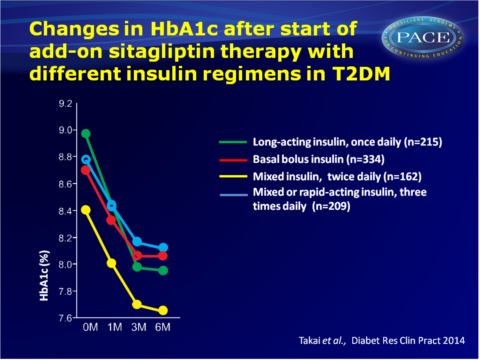 This study confirms the effect of the combination of sitagliptin and intensive insulin therapy, and shows lowering of HbA1c in all insulin regimes. HbA1c lowering was more effective in the long-acting and once-daily insulin groups, than with the other regimes. This may partly be explained by differences in baseline characteristics, although duration of insulin therapy, combined use of sulfonylureas and C-peptide levels were not relevant. Thus, adding sitagliptin to insulin therapy was useful in T2DM patients with poor glycaemic control, irrespective of the insulin regime.