Prevalence of homozygous hypercholesterolaemia in the Netherlands higher than anticipated

Autosomal dominant hypercholesterolaemia (ADH) may be caused by mutations in the genes encoding the LDL-receptor (LDLR), apolipoprotein B (APOB) or PCSK9. Homozygous ADH (hoADH) can be the result of either homozygosity or compound heterozygosity. hoADH is characterised by increased levels of LDL-c and physical signs of cholesterol deposits in the skin, eyes and/or tendons. The lifelong exposure to elevated LDL-c levels typically leads to cardiovascular disease (CVD) at a young age in hoADH patients [1,2]. Statins importantly lower LDL-c levels, but additional therapy, e.g. LDL-apheresis is often required in these patients [3].
The exact prevalence of hoADH is unclear, partly because previous estimates were mostly based on clinical, instead of molecular criteria [4]. Since the 1990s, a cascade screening programme has been exploited in the Netherlands to identify all ADH patients. The widespread awareness of this nationwide programme among general practitioners and medical specialists allowed for a study of the prevalence and clinical phenotype of molecularly defined hoADH in the Netherlands. 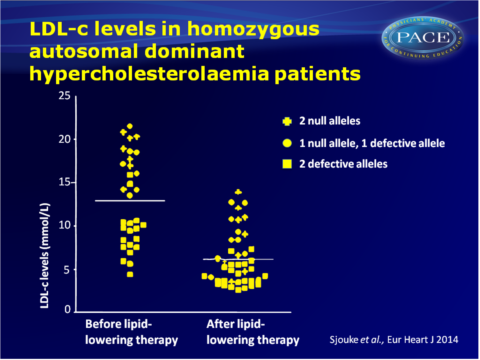 The prevalence of molecularly defined hoADH (hoFH and compHeFH and hoFDB) in the Netherlands was established to be ˜1 in 300000, which is at least three times more frequent than previously estimated. This study also showed a substantial phenotypic variation among patients molecularly diagnosed with hoADH, and importantly, a large part of patients did not fulfil the phenotypic criteria for hoADH. Molecular diagnosis of hoADH is important, since both parents and children of the hoADH patient will be heterozygous carriers. The current numbers suggest that only about one third of heterozygous ADH cases have been identified thus far.