The effect of cholesteryl ester transfer protein inhibition on lipids, lipoproteins, and markers of HDL function after an acute coronary syndrome: the dal-ACUTE randomized trial

Our study looked at what HDL particles did and whether the CETP inhibition with dalcetrapib improved the function or efficiency of these particles. We found that HDL particles did increase in number and function but by a modest 10% despite raising HDL overall by 30%. So there is a discrepancy between cholesterol levels in good particles and how they are working and simply raising HDL, while having a significant effect on function, may not be enough. It is possible that the way that these particles work is more important than the overall levels of cholesterol they carry and maybe these types of drugs are only likely to be effective by increasing function much more. Importantly these data also suggest that more work needs to be done to see how function is related to heart attacks.

Although HDL-particles can have anti-atherosclerotic properties, measuring HDL-cholesterol (HDL-c) levels reflects the content of a variety of HDL particle subtypes with different shape, size and functions [1]. Based on observational data supporting a protective association between HDL-c and cardiovascular (CV) disease, raising HDL-c was explored as a therapeutic approach. Recent evidence suggests that not HDL-c levels per se, but specific HDL subclasses [2] and function, as assessed by cholesterol efflux capacity [3], are more important.
The dal-OUTCOMES study showed that the cholesteryl ester transfer protein (CETP) inhibitor dalcetrapib raised HDL-c in patients with a recent acute coronary syndrome (ACS), but did not reduce CV events [4]. The data of the dal-OUTCOMES study suggest that HDL-c levels at baseline or on-treatment are not associated with clinical events. Instead, HDL particles may for instance be dysfunctional when produced in a pro-inflammatory milieu [5].
Due to clinical futility, the dalcetrapib study program was terminated, but the current study had been initiated before that decision. The dal-ACUTE study evaluates the short-to-medium-term effects of CETP inhibition with dalcetrapib on HDL-c, apolipoprotein A1, in vitro HDL efflux function and inflammatory biomarkers, in 300 patients, immediately after an ACS. Dal-ACUTE is a phase 3, double-blind, randomised and placebo-controlled study, with 24 weeks follow-up. 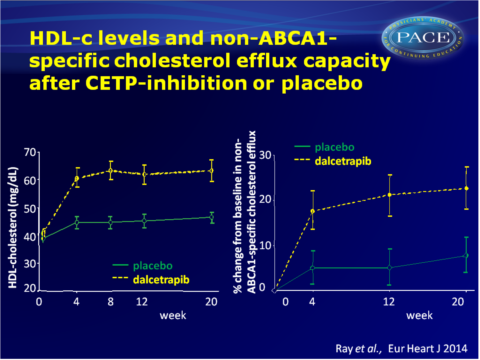 In the pro-inflammatory environment following an ACS, CETP inhibition with dalcetrapib significantly increases HDL-c and apolipoprotein A1 concentrations, as well as in vitro cholesterol efflux. This study suggests that CETP inhibition increases functional HDL-c levels, which is capable of cholesterol efflux through non-ABCA1-mediated pathways. Patient-specific characters appear to influence the extent to which lipids, apolipoproteins and HDL-mediated efflux are altered.
Since the improvement of cholesterol efflux function was more modest than the increase in HDL levels, the data further support the hypothesis that there is a disconnect between HDL particle function, HDL-c concentration and CV outcomes, and the correlation between change in cholesterol efflux and CV events warrant further analysis of the dal-OUTCOMES study.