Edoxaban: a focused review of its clinical pharmacology

Warfarin therapy is a low-cost and effective oral anticoagulant (OAC) therapy for the prevention of stroke in patients with atrial fibrillation (AF). Although its use is long established and well understood, it is subject to a range of limitations in clinical practice, among which its slow onset of action, a narrow therapeutic margin, inadequate anticoagulation, high discontinuation rates, the need for frequent , complex dose adjustments, increased risk of bleeding, drug and food interactions and lack of laboratory standardisation in coagulation monitoring.
Two classes of non-vitamin K OACs or NOACs are now available, the oral factor Xa (FXa) inhibitors (rivaroxaban, apixaban, edoxaban), and the oral direct thrombin inhibitor dabigatran etexilate, which act on the two key serine protease enzymes that drive clot formation and fibrin deposition. These agents have potential advantages over once-daily warfarin, including a rapid onset of action, no significant food interaction, lower potential for drug interactions, and a predictable anticoagulant effect, thus no need for routine coagulation monitoring. However, pharmacodynamic and pharmacokinetic differences exist between the new OACs, which may have implications for their clinical use. This review focuses specifically on the pharmacology of the direct FXa inhibitor edoxaban (for details see original article).

In vitro, edoxaban inhibited FXa in a concentration-dependent and competitive fashion, with high selectivity. Thrombin generation could be inhibited by edoxaban in human plasma, in a concentration-dependent manner. Prothrombin time (PT) and activated partial thromboplastin time (aPTT) were prolonged by edoxaban. Edoxaban was a more potent inhibitor of tissue-factor-induced platelet aggregation and clot-bound FXa in vitro than the indirect FXa-inhibitor fondaparinux.
Also in animal models, edoxaban dose-dependently inhibits thrombus formation and prolonged PT. In venous and arterial thrombosis models and in ex vivo thrombosis models, edoxaban was more potent at reducing thrombus formation than fondaparinux. Edoxaban inhibited the rapid pattern of platelet –consumption that is seen with the direct thrombin inhibitor melagatran. Reduced coagulation pathway activation may be an advantage of FXa inhibitors over direct thrombin inhibitors.


Effects on bleeding in animal models

In healthy subjects, edoxaban is rapidly absorbed (1-3h), with an elimination half-life of 10-14h for edoxaban 60 mg once daily. Peak plasma concentrations are achieved at ~1.5 h after oral administration, and the absolute oral bioavailability is 62%.
Within its therapeutic range in healthy subjects, edoxaban pharmacokinetics is linearly correlated with coagulation parameters.
~60% of edoxaban is excreted via faeces, and ~35% via urine. Edoxaban undergoes biotransformation to several metabolites, but over 70% of an edoxaban dose is excreted unchanged. Gender has a minimal effect on the pharmacokinetics of edoxaban.
In light of the role of the kidneys in the elimination of edoxaban, pharmacokinetics has been studied in patients with renal impairment. Lowering the dose of edoxaban in patients with severe renal impairment gives a similar safety profile and plasma levels to normal doses in patients with normal or mildly impaired renal function. Furthermore, haemodialysis had minimal effects on the clearance of edoxaban in patients with end-stage renal disease, and additional edoxaban dose adjustments may not be needed in this patient group.


Relationship between edoxaban pharmacokinetics and bleeding

Phase II dose-finding studies of edoxaban showed that a 30 mg twice daily regimen gave a higher minimum steady state concentration (Cminss) and bleeding rate than the same total daily dose (60 mg) given in a once daily regimen. Thus, trough concentrations, rather than peak edoxaban concentrations are more closely associated with bleeding rates. Cmin increased with higher once-daily doses, but is affected by body weight.
30 and 60 mg once daily were associated with a similar bleeding rate in Asian AF patients, both lower than with warfarin.
In phase III studies, body weight <60 kg, moderate renal impairment or concomitant treatment with strong P-gp inhibitors were criteria for dose reduction.

In healthy subjects, edoxaban 60 mg once daily has been show to inhibit thrombogenesis for over 24h, indicating that once-daily-dosing provides appropriate anticoagulation efficacy. Reduction of thrombus size has been demonstrated both under arterial and venous flow conditions. Changes in INR, PT and anti-FXa activity correlated closely with edoxaban plasma concentrations. Doses of edoxaban of at least 30 mg were more effective at reducing thrombus generation and platelet activation parameters than fondaparinux 2.5 mg.
24 hours after warfarin therapy, edoxaban was shown to significantly increase PT within 2 hours. Edoxaban also had a greater effect on aPTT than warfarin. 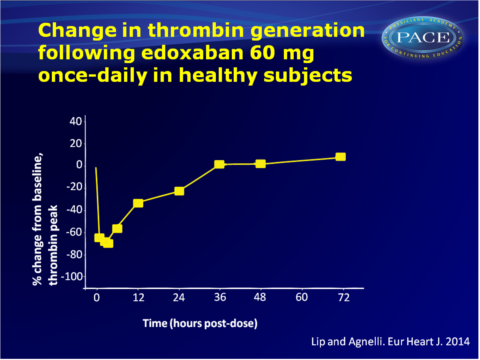 Mean plasma concentrations, absorption and other pharmacokinetic parameters of edoxaban were not affected by food in healthy, fasted or fed volunteers. Limited drug-drug interactions have been observed (see table3 in original publication). In phase III studies with edoxaban, concomitant use of a strong P-gp inhibitor such as dronedarone, quinidine or verapamil was a criteria for dose reduction of edoxaban. Furthermore, restrictions apply to the co-administration of edoxaban with certain mocrolide antibiotics (erythromycin, azithromycin and clarithromycin) and azole antifungals (ketoconazole and itraconazole).
Acetylsalicylic acid <100 mg once daily was permitted with edoxaban in phase III studies, based on observations on bleeding rates and coagulation markers with combination therapy.
Edoxaban sustained circulating gamma-carboxylated osteocalcin, in contrast to warfarin, which impairs carboxylation of osteocalcin in rats. Thus, edoxaban may have a lower risk of adverse effects on bone health.

The option to be able to reverse excessive anticoagulation to limit the risk  of haemorrhage is important in certain clinical situations. Recombinant human factor VIIa (rhFVIIa), anti-inhibitor coagulant complex (FEIBA) and prothrombin complex concentrate (PPSB-HT) are all able to significantly reduce the edoxaban-induced changes in PT in pre-clinical studies.
The recombinant factor Xa protein andexanet alpha (PRT4445) is catalytically inactive and may be a potential reversal agent for factor Xa inhibition. A phase II proof-of-concept study to evaluate safety, tolerability, pharmacokinetics and pharmacodynamics is ongoing, but preliminary data show that andexanet alpha is able to dose-dependently, partially reverse the anticoagulant effects of rivaroxaban and apixaban. Other options for the reversal of anticoagulation are being explored, but they have not been tested following administration of edoxaban.

Since anticoagulation therapy with warfarin is associated with a number of limitations in clinical practice, new OACs have been developed, among which edoxaban. Extensive pharmacological studies have yielded important insights into the drug, which have influenced the design of subsequent clinical studies. Edoxaban appears to have several properties that may be advantageous in anticoagulant therapy.
Based on the phase III clinical Hokusai-VTE and ENGAGE-TIMI 48 studies, marketing authorisation for edoxaban 60 mg once daily (with adjustment to 30 mg if needed) for both stroke prevention in AF and the treatment and prevention of recurrence of VTE was requested in January 2014.