Trends of Hospitalization for Atrial Fibrillation in the United States, 2000 Through 2010: Implications for Healthcare Planning

The prevalence of atrial fibrillation (AF) is projected to increase to 15.9 million worldwide by the year 2050 [1,2].  More than half of these patients will be aged 80 years or older, thus the socioeconomic implications are enormous. The economic burden associated with AF is growing considerably, mainly due to the rising cost of hospitalisations [3].
Understanding trends in AF-related hospitalisation is important for appropriate health care planning and to be able to reduce the demands on the health care system. Furthermore, a national study may also identify specific patters across subpopulations and geographic regions, which may help to identify vulnerable groups for targeted health care interventions.
This study therefore performed a contemporary evaluation of the burden of AF-related hospitalisation, to determine temporal trends and to assess the effect of comorbid diagnoses and demographics on in-hospital mortality, length of stay and total cost of care during the hospitalisation. To this extent, the Nationwide Inpatient Sample (NIS) inpatient database was used, which contains all discharge data from over 1200 American hospitals. 3960011 hospitalisations for AF in the period from 2000 to 2010 were analysed. 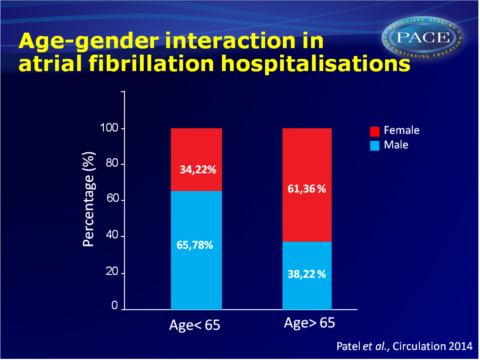 These data show that in the United States, over a period of 11 years, AF hospitalisations increased significantly. Most admissions occurred in patients over 65 years old, and patients of 80 years and older exhibited the largest increase in admissions and greater in-hospital mortality than other age groups. Mortality associated with AF decreased over time, except in patients with heart failure. Length of stay was stable over time, but cost of care increased during the study period.
In light of the persistent increase in AF hospitalisation and associated costs, prevention of AF hospitalisation and effective outpatient management should be employed to reduce burden on the health care system.