The Framingham Heart Study first reported that diabetes was associated with worsened prognosis in patients with heart failure (HF), nearly 35 years ago [1]. Little improvement has, however, been seen in the prognosis of HF in relation to diabetes despite the availability of more intense glucose-lowering pharmacotherapy.
It has been hypothesised that diabetes can be a marker of HF severity rather than a causal risk factor for adverse outcomes. Indeed, chronic HF has been shown to be associated with hyperinsulinaemia and increased insulin resistance, in a severity-dependent matter [2-4]. It had previously been shown that HF patients had a higher risk of developing diabetes after previous myocardial infarction [5].
This nationwide study aimed to investigate whether a relation exists between loop-diuretic dosages, as a proxy for HF severity, and risk of diabetes for patients discharged after first-time HF hospitalisation, and the prognostic effect of developing diabetes in chronic HF. To this extent, four Danish nationwide administrative registers were cross-linked at the individual level (i.e. the Danish National Patient Registry, the Danish Registry of Medicinal Product Statistics, Anatomical Therapeutical Chemical system and the National Population Register).  99.362 Danish citizens of 30 years and older admitted with first-time HF between 1997 and 2010, and alive 90 days after discharge (baseline) were included in this study, excluding those who had claimed prescriptions of hypoglycaemic agents before hospitalisation for HF. 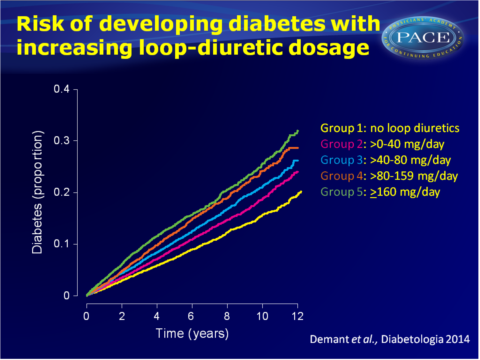 This nationwide study shows that among patients hospitalised for HF, increasing loop-diuretic dosage, as estimated at day 90 after discharge, and used as a proxy for HF severity, is associated with a higher risk of developing diabetes. Thus, this association is not restricted to patients who had experienced a myocardial infarction.
Patients who developed diabetes are at higher risk of death than HF patients not developing diabetes. The sickest patients may develop diabetes. Diabetes might thus be a marker of HF severity, as well as being a causal risk factor for mortality in HF cohorts.
This study emphasises the importance of monitoring and treatment of patients with HF to prevent development of diabetes.