The net benefit of anticoagulation with warfarin rises with age [1], to reduce the risk of ischemic stroke in patients with atrial fibrillation (AF) [2]. The risk of bleeding when on anticoagulation increases with age, thus anticoagulation needs to be frequently monitored. Sensitivity to warfarin, polypharmacy and comorbidites [3] complicate maintenance of stable anticoagulation in elderly patients. As a consequence, elderly patients are undercoagulated, leaving them at high risk of stroke [4]. Novel anticoagulants (specific factor IIa or Xa inhibitors) have the advantage that they do not need regular monitoring, and have few drug and food interactions. This might facilitate more effective stroke prophylaxis in elderly AF patients.
This is a prespecified secondary analysis of the Rivaroxaban once daily oral direct factor Xa inhibition compared with vitamin K antagonism for prevention of stroke and embolism trial in AF (ROCKET-AF) [5,6] to compare the efficacy (prevention of stroke and systemic embolism (SE)) and safety (bleeding) between warfarin and rivaroxaban in patients of >75 years and older, vs. those younger than 75 at study entry. 6229 patients (44%) were aged >75 years (median age: 79 years in both men and women). The median age in the younger group was 66 years. Follow-up duration was 24 months. 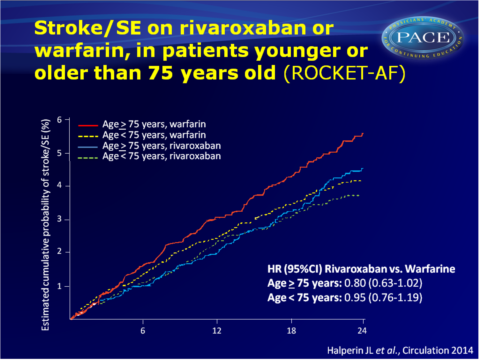 This analysis shows that, although stroke and SE are more common in patients with nonvalvular AF of over 75 years than in younger patients, the effect of rivaroxaban on the prevention of stroke and SE is consistent across both age groups. Rates of major bleeding were higher in older than in younger patients, but not significantly different between treatment groups. In older patients, rivaroxaban was associated with a higher risk of major or clinically relevant non-major bleeding, which was restricted to extracranial bleeding. Intracranial bleeds had previously been shown to be lower with rivaroxaban than warfarin.
Thus, factor Xa inhibition is as effective as adjusted-dose warfarin to anticoagulate elderly patients with nonvalvular AF. Simplified anticoagulation management may improve stroke prevention in high-risk elderly patients.

“Halperin and colleagues, using data from the ROCKET AF trial demonstrate the utility of using rivaroxaban in older adults. Regardless of the medication chosen, however, older patients must always be treated cautiously due to an increased risk of stroke and bleeding, and additional challenges related to drug interactions. Despite the higher risk of primary events as well as risk due to the medications themselves, newer oral anticoagulants may be suitable alternatives to warfarin in older patients due to specific advantages; no need for regular monitoring, more rapid onset of action, and fewer drug and food interactions. As additional data is gathered in this large and higher risk population, our ability to guide optimal use in terms of risk/benefit as well as choose the optimal medication/dosage and mitigate drug interaction, will expand and lead to better care of our older
patients. However, while there is no doubt about the benefits of oral anticoagulation in the elderly, focus must be placed on reducing their risk.”