Epidemiological studies have yielded mixed results on the link between chronic psychosocial stress and cardiovascular disease (CVD) risk. Evidence suggests that stress is a significant predictor of stroke [1-3] , possibly only ischaemic, but not haemorrhagic, stroke [3]. Findings on the effect of stress on coronary heart disease (CHD) are less consistent. Differences between used definitions or use of different measures for stress may explain this, and it has been suggested that people reporting higher stress may also report more symptoms, thus introducing a bias.
In this study, data was used from the Women’s Health Initiative (WHI) observational study, to study associations of baseline stressful life events (SLE) and social strain with incident CHD and stroke over 16 years of follow-up, independent of sociodemographic characteristics. This is a multiethnic cohort of postmenopausal women. Via a questionnaire, women were asked about the occurrence of 11 life events in the past year and to which extent the event had upset them, on a scale from 1 (did not upset me) to 3 (upset me very much), amounting to an SLE score between 0 and 33 (divided into approximate quartiles: low:0, medium-low: 1-2, medium-high: 3-4 and high: >5 based on the responses). Social strain was evaluated with 4 items derived from a previously validated measure of negative aspects of social relationships [4]. A total social strain score could range from 4 to 20, which was divided into approximate tertiles (low: 4, medium: 5-6, high: >7). 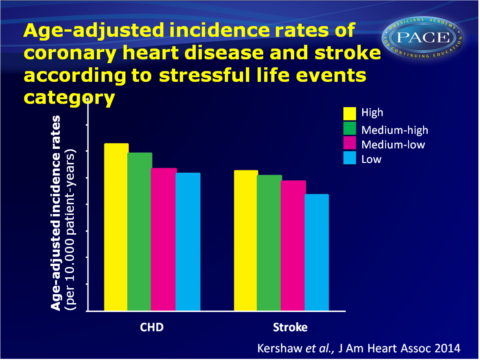 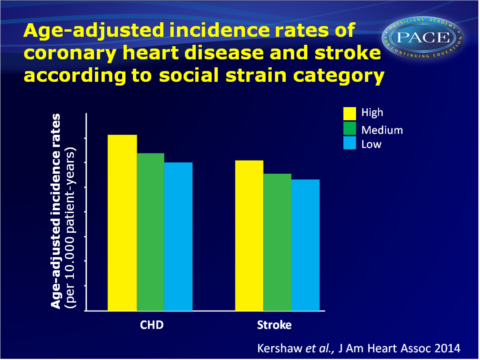 This study shows that both stressful life events and social strain in a one year period are associated with higher incident CHD and stroke, independent of sociodemographic characteristics and depressive symptoms. The associations were explained by hypothesised mediating behavioural and biological factors, with the strongest effect for waist circumference and diabetes . These findings may help to develop more targeted interventions for stress management and lower CVD risk in women.