Monotherapy with PCSK9-antibody superior to ezetimibe in hypercholesterolaemia

Monotherapy with the PCSK9 inhibitor alirocumab versus ezetimibe in patients with hypercholesterolemia: Results of a 24 week, double-blind, randomized Phase 3 trial

Alirocumab is a fully human monoclonal antibody against proprotein convertase subtilisin/kexin 9 (PCSK9), which was shown to reduce LDL-c in combination with other lipid-lowering therapies in phase II studies of 8-12 weeks duration [1-3]. All patients in these studies also received background statin therapy.
Statins increase PCSK9 levels, thus it is important to study alirocumab as monotherapy, to better understand the pharmacokinetics and pharmacodynamics of the drug, and the efficacy and safety in patients not receiving statin therapy.
The ODYSSEY MONO study evaluated the efficacy and safety of alirocumab monotherapy, in comparison with ezetimibe, in patients with hypercholesterolaemia at moderate cardiovascular (CV) risk (10-year risk of fatal CV events >1% and <5%) [4]. Patients were not on statin or other lipid-lowering therapy. Alirocumab was given in a dose regimen of 75 mg every 2 weeks (Q2W, self-injection). This study is part of the ODYSSEY program, a large series of phase III studies designed to comprehensively assess the efficacy and safety of alirocumab in a range of clinical settings and patient groups.
103 patients were randomised to alirocumab or ezetimibe. 14 patients in the alirocumab arm were up-titrated at week 12 to 150 mg Q2W in a blinded manner, since their LDL-c was >70 mg/dL in week 8. 44/52 (85%) patients in the alirocumab arm and 44/51 (86%) patients in the ezetimibe arm completed the 24-week treatment period. 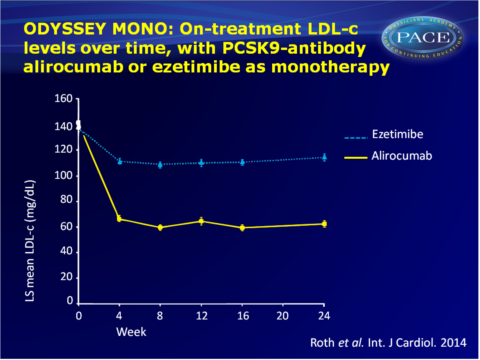 This phase III study of alirocumab showed that it had superior efficacy as monotherapy, as compared with ezetimibe, over 24 weeks of treatment. The findings suggests that 75 mg Q2W is sufficient to provide >50% LDL-c reduction in most patients with moderate CV risk. Tolerability and safety of alirocumab was comparable with ezetimibe, which is relevant for statin intolerant people.