A dose-related increased risk of type 2 diabetes mellitus (T2DM) with statin therapy has been identified in a meta-analysis of randomised controlled trials, as compared to placebo or standard care [1,2], which has been confirmed in observational studies [3-5]. Despite T2DM being a cardiovascular (CV) risk factor, statin treatment still has a net benefit for the prevention of CV disease, including among patients with diabetes [6].
The mechanism underlying the glucose-raising effects of statins is as yet unclear. This study used the Mendelian randomisation principle to investigate this mechanism, with common variants in the gene encoding a drug target as unconfounded, unbiased proxies for pharmacological action on that target. Single nucleotide polymorphisms (SNPs) in the HMG CoA reductase (HMGCR) gene were identified, after which their associations with several phenotypes related to HMGCR inhibition were analysed. Furthermore, a meta-analysis of the effect of statins on T2DM risk in randomised trials was updated and complemented with information on body weight. 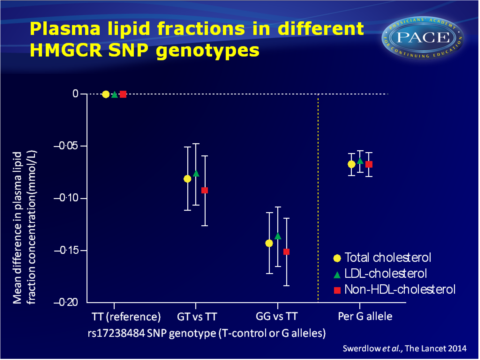 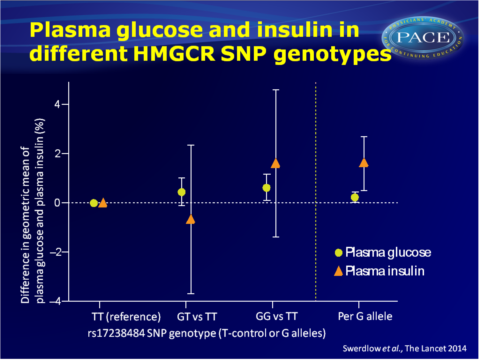 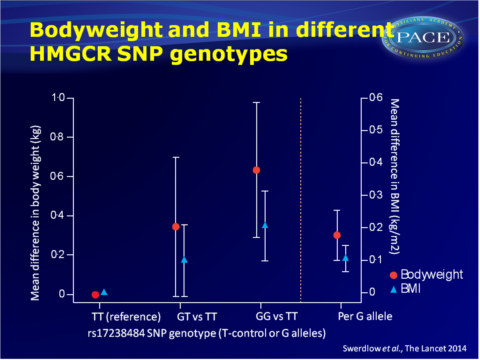 This study shows that both HMGCR genetic variants in population studies and statin treatment in trials are associated with higher bodyweight and higher risk of T2DM, suggesting that these are a consequence of HMGCR inhibition, the intended effect of statins.
The newly discovered association of statin treatment and increased bodyweight may partly explain the increased risk of T2DM in statin-treated patients, but it is unclear whether the relation between HMGCR inhibition and T2DM exclusively runs via changes in body composition. These results underscore the need for lifestyle interventions such as bodyweight optimisation, healthy diet and adequate physical activity, in order to attenuate the risk of type 2 diabetes.

“Swerdlow and colleagues provide a new angle to the debate about the adverse side-effects of statins.” (…) None of the previous “studies could establish whether or not the diabetogenic effect of statins operated through the same pathway as the lipid-lowering HMGCoA-reductase effect or an off-target effect. Swerdlow and colleagues answer this question—because the genetic variant lies near HMGCR, the diabetogenic effect of statins probably operates through the same mechanism as the lipid-lowering effect. (…) These results are important because they suggest that any attempts to make statins more specific and reduce off-target effects will not reduce the risk of the diabetogenic side-effect.”