PCSK9-inhibition safe and effective in heterozygous and homozygous familial hypercholesterolaemia

Patients with homozygous familial hypercholesterolaemia (HoFH) show very low plasma LDL clearance, substantially raised LDL-c and early cardiovascular morbidity and mortality. HoFH is the consequence of mutations in either the LDL-receptor alleles (over 95% of patients), or those of apolipoprotein B, or PCSK9 or the LDL-receptor adaptor protein [1,2].
Heterozygous FH (HeFH) can be the result of mutations in the same genes, although in up to 20% of patients with a clinical diagnosis, no mutation can be identified [3]. HeFH is estimated to affect between one in 250 and one in 300 people worldwide [4,5]. Residual LDL receptor activity is associated with the severity of LDL-c increase and propensity for early CV disease [6,7].
Conventional therapy with statins and ezetimibe can lower LDL-c levels by about 40-45% on average [8-10]. Despite the recent approval of mipomersen (inhibiting apolipoprotein B synthesis) by the FDA and the EMA and of lomitapide (inhibiting microsomal triglyceride transfer protein) by the EMA for the treatment of HoFH, LDL-c levels remain substantially high in nearly all patients with HoFH, as well as in patients with HeFH.
Evolocumab is a fully human monoclonal antibody that binds to PCSK9, which targets the LDL-receptor for degradation. Evolocumab allows increased recycling of LDL-receptors and lowers LDL-c levels by 60% in patients with heFH [11].
The Trial Evaluating PCSK9 Antibody in Subjects with LDL Receptor Abnormalities (TESLA) part B study was a randomised, double-blind, placebo-controlled phase 3 trial testing the efficacy and safety of evolocumab in patients with HoFH. RUTHERFORD-2 was a multicentre, randomised, double-blind, placebo-controlled study to assess safety and efficacy of evolocumab administered biweekly or every month in a large and diverse cohort of patients with HeFH with LDL-c >2.6 mmol/L despite intense lipid-lowering therapy. TESLA and RUTHERFORD-2 were published simultaneously in The Lancet. 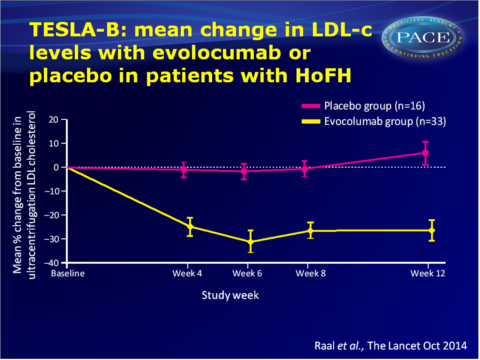 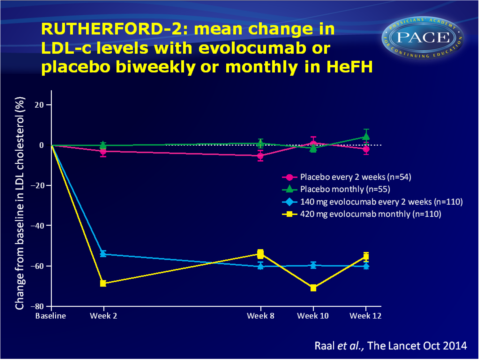 The TESLA part B study confirms data from the pilot trial that PCKS9 inhibition with monthly subcutaneous evolocumab 420 mg lowers LDL-c by 30.9% as compared to placebo. This study shows that genetic information gives insight into possible response to treatment of HoFH, and genetic confirmation of HoFH could be used to select patients for evolocumab treatment. In most HoFH patients, with at least one defective LDL-receptor mutation, LDL-c reduction was 41%, thus many patients in this difficult-to-treat population appear to benefit from evolocumab.
The RUTHERFORD-2 study shows that addition of evolocumab treatment to existing lipid-lowering therapy gives LDL-c reductions of about 60%, with a majority of patients achieving LDL-c<1.8 mmol/L. Patients with receptor-negative mutations responded equally well to treatment as those with defective mutations, suggesting that the response to PCSK9 inhibition with evolocumab in HeFH depends mostly on upregulation of the non-affected LDL-receptor, while the mutant receptor plays little role. Thus, in patients with HeFH genetic analysis might not be helpful in assessment of response to evolocumab.
The variability of the response to evolocumab within patient groups with different genetic characteristics as seen in both studies suggests that other factors than the receptor mutation alone must also play a role in LDL-c reduction with evolocumab.