Amiodarone, Anticoagulation, and Clinical Events in Patients With Atrial Fibrillation: Insights From the ARISTOTLE Trial

Amiodarone is an effective anti-arrhythmic drug for the prevention of atrial fibrillation (AF), recommended for patients with frequent, symptomatic AF episodes [1]. Amiodarone interferes with warfarin metabolism through the CYP 2C9 pathways, and makes it more difficult to maintain INR values of 2 to 3 [2-5]. This limits the use of amiodarone in patients with AF who receive warfarin to prevent stroke.
Amiodarone may also cause noncardiovascular side-effects, including occasionally possibly life-threatening pulmonary toxicity [6,7]. Amiodarone has furthermore been associated with an increased risk of cancer [8-10] and excess non-CV deaths [11].
This study evaluated the effects of amiodarone on outcomes in the ARISTOTLE trial. The effects of apixaban or warfarin treatment on CV outcomes (stroke and systemic embolism (SE), death and bleeding) in relation to amiodarone use at the time of randomisation were compared. 2051 patients enrolled in ARISTOTLE received amiodarone and 15856 patients did not. Mean follow-up time was 21.7 months for the amiodarone group and 21.8 months for patient who were not on amiodarone. 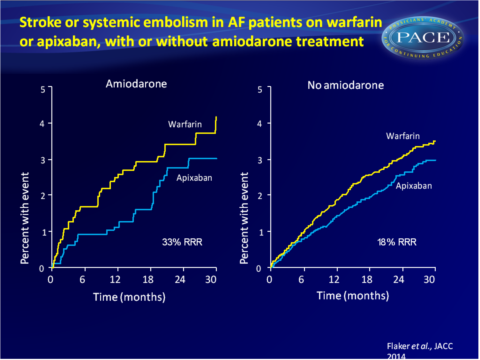 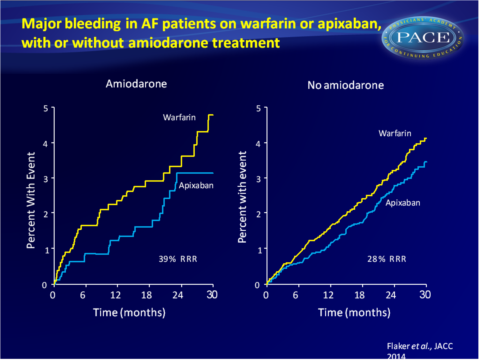 This analysis of the ARISTOTLE trial shows that amiodarone use in patients with AF was associated with a significantly increased risk of stroke and SE and a lower TTR when used simultaneously with warfarin. Apixaban consistently and similarly reduced the rate of stroke and SE, death and major bleeding when compared with warfarin, whether patients received amiodarone or not.