Higher consumption of poly-unsaturated fatty acids (PUFAs) as opposed to trans-fat and saturated fatty acids (SFA) is recommended to reduce the risk of coronary heart disease (CHD) [1,2]. Most attention has been given to the effect on CHD risk of n-3 PUFA (including long chain n-3 and α-linoleic acid (ALA)).
Linoleic acid (LA) is the predominant n-6 PUFA in the Western diet, as a component of vegetable oils and nuts. Evidence suggests that higher LA reduces risk factors for CHD, as it was found to lower LDL-c [3-6], to improve insulin sensitivity [3,7], and to lower risk of hypertension [8,9]. Thus also substituting SFAs with n-6 PUFAs has been recommended, although concerns have been raised about high LA consumption due to its potential pro-inflammatory and thrombogenic properties [10-13]. Randomised controlled feeding studies did not support this hypothesis.
Several studies have looked at the relation between n-6 PUFA or LA with risk of CHD, but led to inconclusive results. A systematic review and meta-analysis of prospective cohort studies was therefore conducted to investigate the association between dietary LA intake and CHD endpoint in generally healthy populations. Mean LA consumption varied substantially across studies (median intakes ranging from 1.5% to 6.4% of energy, 10th-90th percent range from 1.1% to 9.5%). 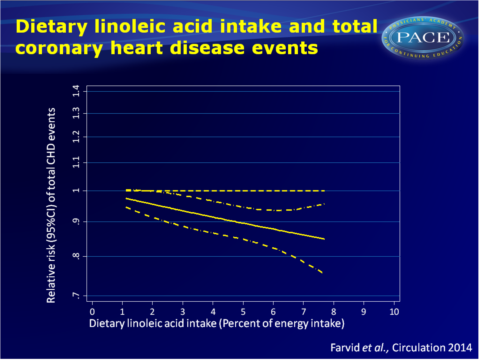 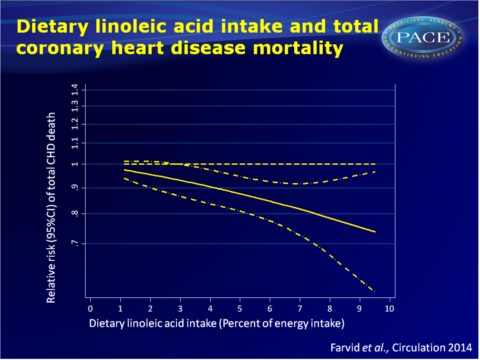 This systematic review and meta-analysis suggest a that risk of CHD decreases with higher dietary LA intake, when replacing either carbohydrate or saturated fat. Inverse linear dose-response relationships were seen between dietary LA intake and both total CHD events and CHD deaths. These data support current recommendations to replace saturated fat with LA for primary prevention of CHD in the general population, as previously postulated harmful effects of high LA consumption were not confirmed in these analyses.

“The LA-is-harmful hypothesis depends heavily on the view that an LA metabolite, AA, is converted to potent proinflammatory signalling molecules. But AA is not the only LA metabolite with potential effects on CHD; LA itself can be converted to a wide variety of bioactive molecules. (…) If one examines the entire AA metabolome, one finds a constellation of metabolites, including a variety of prostaglandins, leukotrienes, ligands for endocannabinoid receptors, lipoxins, isoprostanes, nitrated AA, and epoxides, among others. Some are proinflammatory but some are anti-inflammatory or promote the resolution of inflammatory insults. Often these effects have only been observed in certain cell/tissue types and under potentially nonphysiological conditions, and their effects in normal physiology or those of other metabolites remain to be discovered. The net impact on human metabolism (and CHD risk) of this multitude of products will ultimately be determined by their interaction among themselves (and with their omega-3 fatty acid analogues) and is virtually impossible to predict.
(…) Suffice it to say that large-scale, multiyear intervention trials in which one major dietary component is (must be) substituted for another are both difficult to conduct and to interpret because of the multiple variables involved.(…) Importantly, the current data continue to support the recommendation of many health authorities for 5% to 10% of energy as LA.”