A Randomized Trial of Intraarterial Treatment for Acute Ischemic Stroke

The only reperfusion therapy in patients with acute ischaemic stroke with proven efficacy is intravenous alteplase, if administered within 4.5 hours after symptom onset [1]. Its therapeutic time window is, however, narrow and several contraindications prevent its use in some [2]. Furthermore, it is not as effective at opening proximal occlusions of the major intracranial arteries, which are a common cause of acute stroke [3,4]. Recanalisation after alteplase is seen in only about one third of patients with an occluded internal-carotid artery terminus [5]. Without revascularisation, prognosis is generally poor [6].
In addition to locally delivered thrombolytic agents, intraarterial therapy can be applied by thrombectomy with mechanical devices. Contradicting results and suboptimal study designs have resulted in uncertainty regarding the efficacy of the catheter-based approach [7-9].
MR CLEAN (The Multicenter Randomized Clinical Trial of Endovascular Treatment for Acute Ischemic Stroke in the Netherlands) assessed whether interaarterial treatment plus usual care was more effective than usual care alone in patients with a proximal arterial occlusion in the anterior cerebral circulation, if treated intra-arterially within 6 hours after symptom onset. In a pragmatic, phase 3, multicenter clinical trial set up, MR CLEAN addressed previous methodological limitations. Open-label treatment was randomised, but end-point evaluation was blinded. Intraarterial treatment consisted of arterial catheterisation with a microcatheter to the level of occlusion to perform mechanical thrombectomy or deliver a thrombolytic agent, or both (choice of method was left to discretion of interventionist). 500 patients participated in the study. The primary outcome was the score on the modified Rankin scale at 90 days. 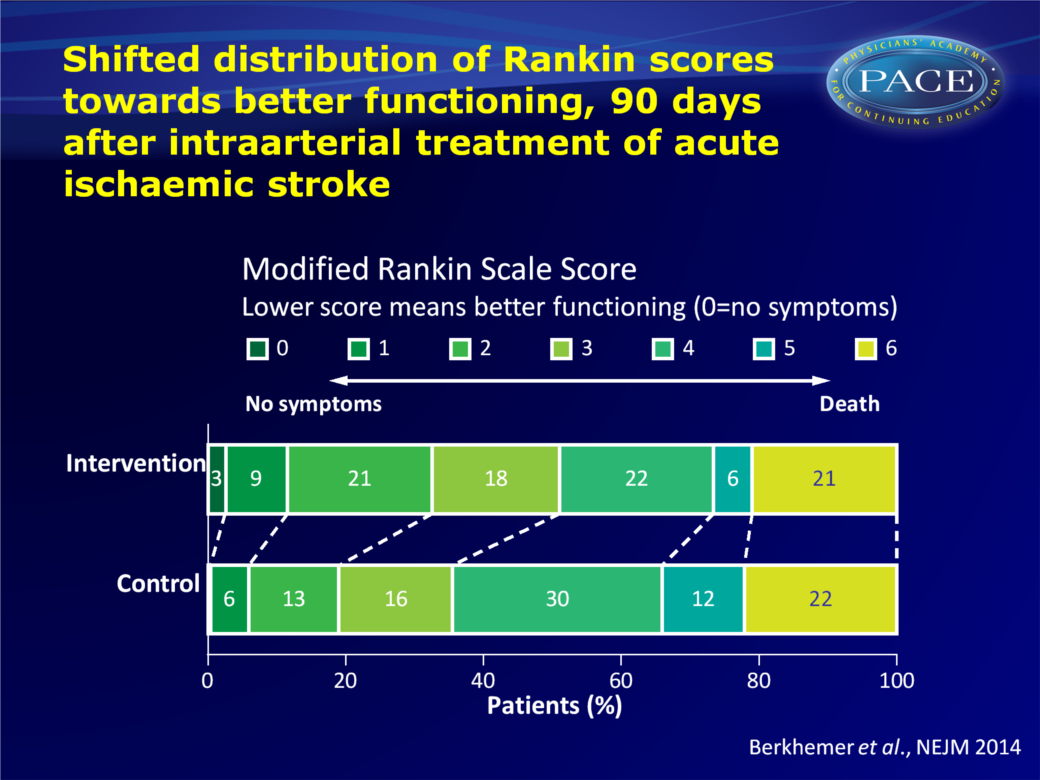 Functional recovery in patients with acute ischaemic stroke caused by a proximal intracranial arterial occlusion of the anterior circulation is better after intraarterial treatment, if administered within 6 hours after stroke onset. In 82% of cases, retrievable stents were used. The fact that these positive findings contradict earlier neutral efficacy results for intraarterial treatment may stem from the requirement in MR CLEAN of a radiologically proven intracranial occlusion for study elegibility.