Although overall mortality rates from coronary heart disease (CHD) have shown a decline over the past decades, this trend is less strong in adults aged 35-54. Mortality rates among women aged 35-44 years may even have increased in recent years [1,2]. These developments may be explained by changes in risk factor profiles.
Young women with favourable cardiovascular disease (CVD) risk profiles have low CHD mortality [3]. Primordial prevention refers to prevention of the development of clinical risk factors [4], thus by maintenance or adoption of a healthy lifestyle. Primordial prevention will sustain women in a low CVD risk profile, thus reduce the occurrence of CHD, and also reduce medical costs associated with intermediate CVD-related conditions.
This is an analysis of the prospective Nurses’ Health Study II (NHSII), in which the lifestyle and medical history of nurses of 25-42 years old were assessed, and women were followed for up to 20 years for development of risk factors and disease. 6 factors were considered relevant to define optimal lifestyle: no smoking, healthy diet, physical activity (at least 2.5 h/week of moderate to vigorous intensity activity), television watching (<7h/week), BMI (18.5-24.9 kg/m2) and alcohol consumption (0.1-14.9 g alcohol/day, approximately 1 drink). Data of 88940 women were included in a CHD analysis, and of 69247 in the CVD risk factor development analysis. 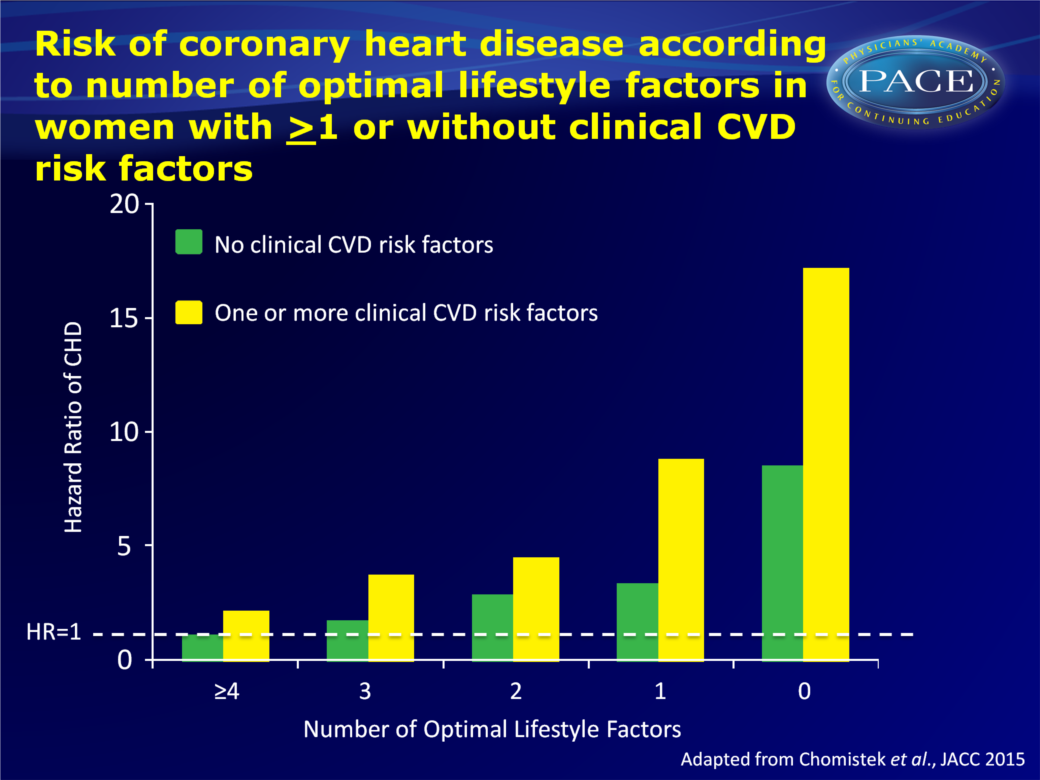 This large, prospective study in young women shows that adhering to a healthy lifestyle is associated with a lower risk of incident CHD and lower risk of diagnosis of clinical CVD risk factors during 20 years of follow-up. Thus, even in young women, maintaining a healthy lifestyle is central to primordial prevention of CHD and the development of CVD-related conditions like diabetes, hypertension and hypercholesterolaemia. In women who already had one diagnosed CVD risk factor, maintaining a healthy lifestyle was equally important for CHD prevention. This is important considering recent indications that CHD mortality rate may not decline in young women as it is in other subpopulations.

“To competent clinicians on the front lines of primary and primordial prevention, these results will not be terribly surprising. (…) This is not, however, a criticism of the study. (…) If the recent trend of rising CHD in young women is indeed true and not a mere blip, then this report is both timely and encouraging: the means to reverse this trend are known. (…) This study represents another instance of the conceptual broadening of the CV public health discussion to trumpet the power of primordial prevention. Yes, the significance of exercise, diet, body mass, and tobacco in risk reduction is well known, but by placing these ideas in the realm of primordial prevention, we move the conversation (among clinicians, patients, public health advocates, food producers and suppliers, designers of our built environment, and so on) away from the things we should not be doing in our effort to prevent disease to the things we should be doing in our effort to promote health.”