Renal effects of atorvastatin and rosuvastatin in patients with diabetes who have progressive renal disease (PLANET I): a randomised clinical trial.

Declining renal function progressing to end-stage renal disease is increasingly seen worldwide, often as a consequence of atherosclerosis and type 2 diabetes (T2DM) [1]. Lifestyle changes, glucose-lowering and blood pressure-lowering drugs can diminish the risk of adverse renal outcomes, and also cholesterol is thought to be a risk factor for renal failure.
Although experimental studies suggest that cholesterol contributes to renal disease progression, and that lowering cholesterol concentrations with statins was renoprotective [2], the effect of statins on renal function is less clear in clinical studies. A combination of simvastatin and ezetimibe recently failed to show a renoprotective effect in a hard renal outcome study [3,4].
The Prospective Evaluation of Proteinuria and Renal Function in Diabetic Patients with Progressive Renal Disease (PLANET I) trial was set up to assess the renal effects of 52 weeks of treatment with atorvastatin 80 mg (n=111), rosuvastatin 10 mg (n=118) or rosuvastatin 40 mg (n=124) in 353 patients with diabetes (type 1 [n=47] or 2 [n=278] in the intention-to-treat population, n=325) and proteinuria (urine protein:urine creatinine [U-PCR] 500–5000 mg/g). PLANET II was a similar trial in patients with proteinuria but without diabetes. 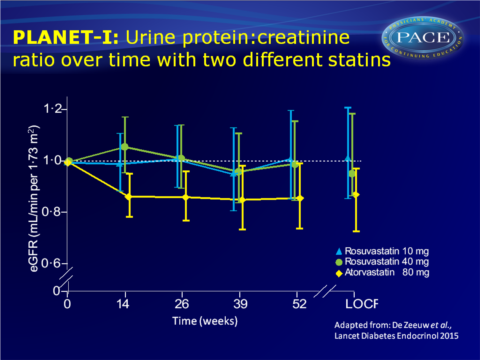 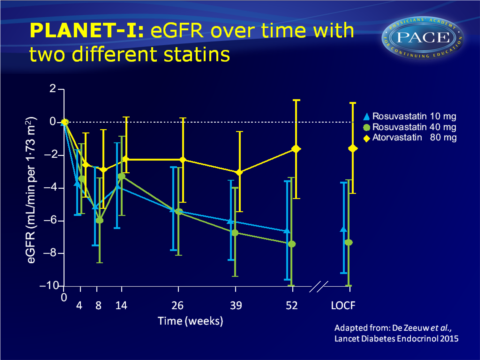 The PLANET I study showed reduced urinary protein excretion, but unaffected eGFR in patients with diabetes and proteinuria who were treated during 1 year with atorvastatin 80 mg. In patients randomised to rosuvastatin 40 mg, urinary protein excretion was not changed, but eGFR decreased as compared to baseline.
Both PLANET I and II suggest, although they were not powered to directly compare the two statins, that atorvastatin and rosuvastatin have different renal profiles in patients with proteinuria. Based on the current study, it cannot definitely be concluded whether atorvastatin is more renoprotective or neutral, and rosuvastatin neutral or harmful in this high-risk population.

“Recent findings have raised concerns about potential renal adverse effects of some statins, particularly when given in high doses.” (…) In the randomised PLANET I study, “Acute kidney injury and doubling of serum creatinine concentration were more common among patients taking rosuvastatin 40 mg than among those taking rosuvastatin 10 mg or atorvastatin 80 mg. The type of renal injury induced by rosuvastatin was not established. However, some case reports indicate that rosuvastatin can induce interstitial nephritis.
The PLANET studies have several limitations. Neither PLANET I nor PLANET II was powered to assess differences between treatment groups for any outcome. Indeed, in PLANET I, although the primary outcome fell significantly in the atorvastatin group but not in the two rosuvastatin groups, post-hoc between-group comparisons were not statistically significant. Thus, further research is needed to establish whether atorvastatin provides any benefit relative to rosuvastatin.”

Find this article at The Lancet