Type 2 diabetes mellitus (T2DM) not only increases the chance of developing heart failure (HF), but also negatively affects the outcomes in patients with established HF [1-3]. The effects of treatment for T2DM on HF outcomes is unclear since it has not adequately been addressed, but potential cardiovascular (CV) harm has been suggested with some glucose-lowering medications [4].
The SAVOR-TIMI 53 [5,6] and EXAMINE [7] trials studied CV outcomes in patients with T2DM treated with DPP-4 inhibitors. In SAVOR-TIMI 53, treatment with saxagliptin did not affect the composite outcome of CV death, myocardial infarction (MI) or ischaemic stroke in patients with T2DM and a history or risk of CV events, although the rate of hospitalisation for HF was higher than in patients receiving placebo (3.5% vs. 2.8%).
In EXAMINE, alogliptin was non-inferior to placebo in lowering the risk of the composite endpoint of CV death, MI or stroke (11.3% vs. 11.8%) in patients with T2DM and a recent acute coronary syndrome (ACS) event. This is an analysis of HF outcomes in 5380 patients with a history or high risk of CV disease in a pre-specified exploratory and post-hoc analysis of EXAMINE. An extended MACE composite endpoint was used that combined the first occurrence of all-cause mortality, non-fatal MI, non-fatal stroke, urgent revascularisation due to unstable angina, and hospital admission for HF. Changes in NT-pro-BNP from baseline tot 6 months were also examined. 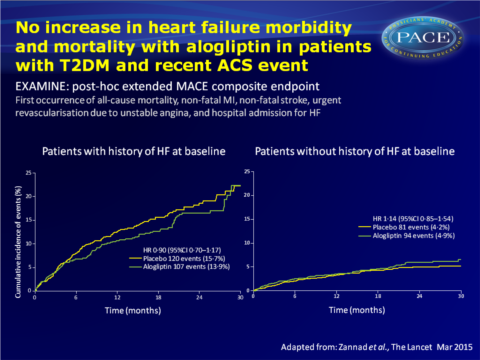 This analysis of EXAMINE trial showed that alogliptin did not lead to more HF morbidity and mortality in patients with T2DM and a recent ACS event, nor to worsened HF outcomes in patients with pre-existing heart failure. NT-pro-BNP concentrations similarly decreased In six months with alogliptin as with placebo. Although this was a post-hoc analysis, the large sample size, high event rates and prospectively adjudicated outcomes strengthen the reassuring interpretation.

Standl and Schnell note an important difference between these long-awaited heart failure data of EXAMINE and SAVOR-TIMI 53, which showed an increase in hospital admissions for HF. Different composite endpoints have been choses in the respective studies. In the current EXAMINE report, “cardiovascular deaths that followed heart failure were not counted in the composite analysis, but were counted in the analysis of cardiovascular deaths alone. Clearly, therefore, heart failure after myocardial infarction is common among patients with diabetes, which makes survivor bias in this context a possibility.” (…)
“We believe that there are also striking similarities in the EXAMINE and SAVOR TIMI 53 heart failure outcomes. The two studies confirm that, in patients with a history of heart failure, treatment with a DPP-4 inhibitor does not lead to excess risk of developing cardiovascular endpoints, such as cardiovascular death, non-fatal myocardial infarction, or non-fatal stroke, despite an increased risk of these events in this particular group. Conversely, in both studies the rate of heart failure
was increased in patients taking DPP-4 inhibitors who had no history of this disorder (…). The general recommendation to look out for the signs and symptoms of emerging heart failure in all patients with
diabetes at all times, therefore, seems to be particularly helpful in the context of DPP-4 inhibitor therapy.”
Since the risk of hospital admission for HF was highest in patients with biomarkers for HF in the highest quartile at baseline, these data hint at some silent or undiagnosed HF in both study cohorts.
Some uncertainties prevail concerning the risks and for what signs treating physicians should be vigilant. The TECOS trial, which is studying the use of sitagliptin in 14724 patients with T2DM and at high CV event risk, will address all questions arising from SAVOR TIMI 53 and EXAMINE.