Several new or non-vitamin K antagonist (VKA) oral anticoagulants (NOACs) that directly inhibit thrombin or activated factor Xa (FXa) have been found to be at least as effective and safer than warfarin in preventing stroke and systemic embolic events (SE) in patients with atrial fibrillation (AF). Because of their more predictable anticoagulant effect than that of VKA, they are administered in fixed doses, without the need for routine coagulation monitoring.
A pharmacokinetic analysis from the RE-LY trial showed, however, that fixed dosing of the thrombin inhibitor dabigatran resulted in significant variation in plasma concentrations. This depended on patient factors, for instance older age and renal dysfunction were associated with higher dabigatran concentrations and the risk of bleeding [1]. Thus, measurement of drug concentration or anticoagulant activity may be needed when prescribing NOACs.
The ENGAGE AF-TIMI 48 trial evaluated two once-daily dose regimens of the FXa inhibitor edoxaban in comparison with warfarin in over 21000 patients with AF at moderate-high stroke risk [2,3]. Both edoxaban regimens were non-inferior to warfarin in the prevention of stroke or SE, and reduced major bleeding, intracranial haemorrhage and CV mortality [2]. A 50% dose reduction was applied in patients with clinical features known to increase drug exposure and the risk of bleeding.
This analysis aimed to assess whether tailoring of the dose of NOACs on the basis of clinical information alone prevented excess drug levels and whether this optimised the balance between the risk of ischaemic and bleeding events in the ENGAGE AF-TIMI 48 trial. 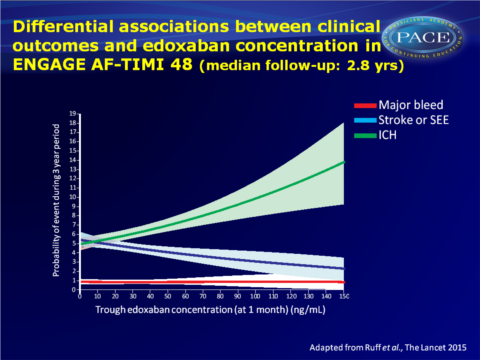 “…plotting the therapeutic probability of clinical events (ie, intracerebral haemorrhage, major bleeding, and stroke or systemic embolism) against edoxaban concentrations, the investigators conclude that dose reduction preserved the clinical effect and that the therapeutic window for bleeding is less than that for protection against stroke or systemic embolism.” (…) “They note that patients with atrial fibrillation and renal dysfunction, the main driver for dose reduction, have a significantly higher risk of stroke and bleeding than those without renal dysfunction.” (…) “The plot of edoxaban trough concentrations and clinical outcomes in ENGAGE AF TIMI-48 shows that intracerebral haemorrhage has a weak correlation with edoxaban concentration, pointing towards a specific warfarin-dependent hazard for this important clinical endpoint. These data probably explain the consistent benefit with regard to intracranial haemorrhage seen across all the NOACs. The plot for stroke and systemic embolism shows a broad concentration range for reduction, whereas major bleeding correlated the closest with edoxaban concentration but has variability most likely because of patient factors.”