LDL-hypothesis confirmed with non-statin therapy, even below target LDL-c levels

Intensive statin therapy incrementally reduces LDL-c levels as well as rates of nonfatal CV events, as compared with moderate dose statin therapy, but residual risk of recurrent CV events remains [1-5]. Moreover, due to safety concerns associated with high-dose statin therapy [6], additional lipid-modifying therapies are warranted.
Ezetimibe targets the Niemann-Pick C1-like 1 (NPC1L1) protein, thereby inhibiting absorption of cholesterol from the intestine [7,8]. In addition to statins, ezetimibe lowers LDL-c with an extra mean 23-24% [9,10]. It was as yet unknown whether further lowering of LDL-c levels with addition of ezetimibe to statin therapy yields a clinical benefit.
The Improved Reduction of Outcomes: Vytorin Efficacy International Trial (IMPROVE-IT) therefore evaluated the effect of ezetimibe combined with simvastatin (SIM-EZE), as compared with simvastatin monotherapy (SIM), in stable patients who had experienced an acute coronary syndrome (ACS), with LDL-c values within guideline recommendations. 18144 patients were randomised to SIM alone or SIM-EZE. After a median follow-up of 6 years, 42% of patients in both groups had discontinued the study medication without having experienced a primary end-point event or having died. 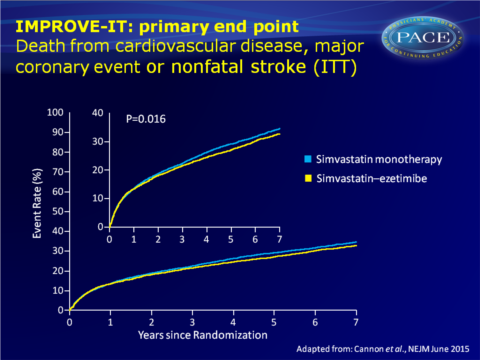 Addition of the non-statin agent ezetimibe to simvastatin further lowered LDL-c by about 24% and yielded a statistically significantly lower risk of CV events, as compared with simvastatin monotherapy. No difference was seen in CV mortality or death by any cause between treatment groups, but rates of MI and ischaemic stroke were significantly lower with addition of ezetimibe.
The clinical benefit obtained with ezetimibe is consistent with that seen with LDL-c lowering in statin trials. Although other lipoproteins and hsCRP were also reduced, the consistency with the observations in statin trials does support the LDL-hypothesis that predicts that lowering LDL-c leads to a reduction in CV events, even beyond guideline-recommended target of 70 mg/dL.

Despite a large body of evidence supporting the LDL hypothesis, in which LDL-c is a causal factor in the development of atherosclerotic vascular disease, some discussion remains on that the beneficial effects of statins are not adequately explained by their effects on LDL-c. An alternative theory, the ‘statin hypothesis’, proposes that the pleiotropic effects of statins that are not related to their lipid-lowering effect, may account for at least some of the benefit of statin therapy in preventing CV events; thus that statins have a unique efficacy in atherosclerotic vascular disease that is not shared by other lipid-modifying agents, and that lowering LDL-c levels is not the only basis for the beneficial effect of statins. “IMPROVE-IT is a landmark study in that it is the first clinical trial to show a benefit of adding a nonstatin lipid-modifying agent to statin therapy.” (…) “IMPROVE-IT should not be interpreted as showing anything uniquely beneficial about the use of ezetimibe. Indeed, the real implication of IMPROVE-IT is to suggest that all reductions in LDL levels, regardless of mechanism, are of equivalent benefit.” (…) “These data help emphasize the primacy of LDL cholesterol lowering as a strategy to prevent coronary heart disease. Perhaps the LDL hypothesis should now be considered the “LDL principle.”

Find this article online at NEJM