Preclinical studies have shown direct antiatherogenic effects of HDL-c or its major protein apoA-I, including prevention or regression of lesions in animals models of atherosclerosis [1,2]. Clinical trials and genetic variation studies, however, do not confirm that scenarios that raise HDL-c levels decrease risk of coronary heart disease  (CHD). Therefore, effort is now directed at studying different properties of HDL.
Cholesterol efflux capacity reflects the ability of HDL to promote cholesterol removal from lipid-laden macrophages, which is the first step in reverse cholesterol transport [3]. HDL cholesterol efflux capacity was found to be inversely associated with prevalent risk of CHD in a cross-sectional study [4], but this study design has inherent limitations. A subsequent report confirmed an inverse relationship with prevalent CHD, but suggested the potential for a positive association between cholesterol efflux capacity with incident CV events [5]. In a small cohort study, efflux capacity was inversely associated with incident CV disease events, independent of HDL-c levels [6].
This is an analysis of the association between HDL-c efflux capacity and incident CHD in a prospective, population-based nested case-control study with patients from the EPIC-Norfolk study [7] in the UK. 1745 initially healthy people who later developed fatal or non-fatal CHD were identified, and matched to initially healthy people who did not develop any CV disease during follow-up. 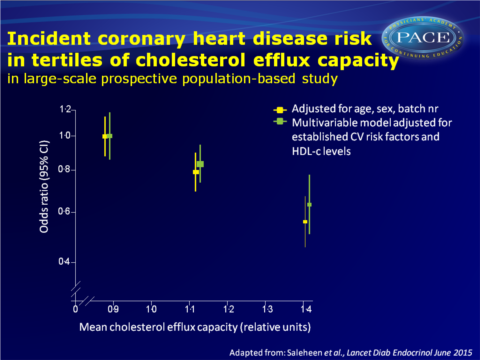 This large-scale prospective population-based study shows that cholesterol efflux capacity was significantly and inversely associated with incident coronary heart disease events, independent of established CV risk factors, including HDL-c and apoA-I concentrations. Because the causal nature of the relationship between efflux capacity and CHD risk is uncertain as yet, studies considering genetic information need to exclude residual confounding.