Antisense inhibition of APOC3 lowers APOC3 and triglycerides in hypertriglyceridaemia

Antisense Inhibition of Apolipoprotein C-III in Patients with Hypertriglyceridemia

Elevated triglyceride (TG) levels are associated with a wide range of pathological conditions, among which several relating to cardiovascular (CV) health. Patients with TG levels above 2000 mg/dL (22.6 mmol/L) are at high risk for pancreatitis [1,2]. Current guidelines recommend fasting TG levels below 1000 mg/dL (11.3 mmol/L) or 10 mmol/L [3,4], to prevent transient increases at which pancreatitis can develop. At moderate-to-high TG elevations, patients may be at risk of incident or recurrent coronary heart disease events.
Apolipoprotein C-III (APOC3) is a central regulator of lipoprotein metabolism, with a key role in regulating plasma TG levels.  APOC3 is a component of TG-rich lipoproteins, known to inhibit lipoprotein lipase-mediated hydrolysis of TG-rich lipoproteins and to negatively affect receptor-mediated hepatic uptake of remnants of TG-rich lipoproteins [5-10]. At higher concentrations, APOC3 inhibits hepatic lipase activity, which converts VLDL to IDL and LDL, and plays a role in the remodelling of HDL [11]. Thus, elevated APOC3 levels results in accumulation of atherogenic VLDL and chylomicron remnants, as a consequence of impaired lipolysis and disturbed clearance of TG-rich lipoproteins.
Elevated APOC3 levels, especially when present on apolipoprotein E-containing lipoproteins, are an independent risk factor for CVD. On the other hand, genetic variants causing lower APOC3 levels or function have been linked to lower risk of CHD. It remains to be determined whether targeted reduction of APOC3 will yield the same benefit in patients with high CV risk.
ISIS 304801 is an antisense oligonucleotide specifically binds to APOC3 mRNA and induces its degradation. Selective dose-dependent reduction of APOC3 protein and concomitant lowering of TG levels have been obtained with oligonucleotides in several preclinical animal models, and with ISIS 304801 in healthy volunteers [12], and in patients with the familial chylomicronaemia syndrome [13]. This randomised, placebo-controlled, dose-ranging phase 2 study evaluated the pharmacodynamics properties of 13 weeks ISIS 304801 as monotherapy and as add-on to stable doses of fibrate therapy in patients with severe or uncontrolled hypertriglyceridaemia. 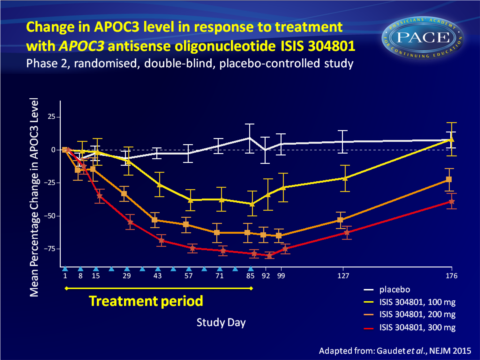 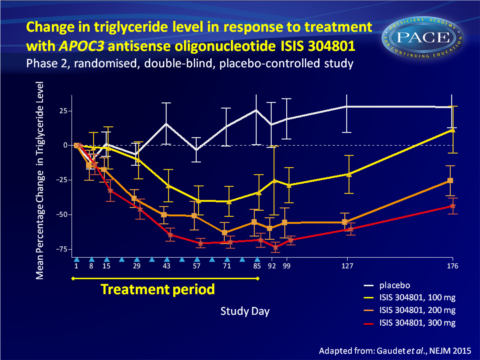 This study demonstrates that inhibition of APOC3 synthesis with the second-generation antisense drug ISIS 304801 resulted in dose-dependent mean reductions of APOC3 (80%) and TG (71%) levels in patients with a broad range of baseline levels. ISIS 304801 as add-on to stable fibrate therapy yielded similar incremental reductions. The reductions in plasma APOC3 levels may have been the result of antisense oligonucleotide-induced decreases in hepatic APOC3 production, or of increased catabolism of TG-rich lipoproteins.
While HDL-c increased and VLDL-c levels decreased, an increase in LDL-c and decrease in ApoB-48 were seen, all in a dose-dependent manner. The increase in LDL-c could potentially be offset by treatment with statins or fibrates. Indeed, the increase in LDL-c was less pronounced when ISIS 304801 was combined with fibrate therapy.
Find this article online at NEJM