The addition of NT-proBNP, the N-terminal fragment of the prohormone for BNP, to traditional risk factors significantly improves the risk prediction of HF [10], since it is: On the other hand:  The inverse relationship between BMI and NT-proBNP has led to concerns about the use of NT-proBNP for the diagnosis of HF in obese individuals [8], however there are no data on the prognostic value of NT-proBNP for HF risk prediction of obese individuals.
This study assessed the utility of NT-proBNP for HF risk prediction across different BMI categories in the Atherosclerosis Risk in Communities (ARIC) Study, a community-based cohort of 15.792 middle-aged individuals, who had no history of HF at baseline, and were followed-up for a median of 20.6 years. 12.230  ARIC participants free of prior HF at baseline and with BMI ≥ 18.5 kg/m2 were followed up.

• NT-proBNP was inversely correlated with BMI: Pearson correlation coefficient: −0.10; P<0.001
• Higher BMI category at baseline was associated with higher rates of HF, with incidence rates per
1000 person-years: • At each NT-proBNP level, higher BMI was associated with greater absolute HF risk. For NT-proBNP of 100 to <200 pg/mL, the average 10-year HF risk was: • NT-proBNP increase from 25 to 150 pg/mL was associated with an incidence rate difference for HF (per 1000 person-years) of • NT-proBNP improved HF risk prediction overall, even among those with severe obesity: BMI ≥35 kg/m2: improvement in C statistic 0.032; 95% CI: 0.011–0.053
• Assessment of the NT-proBNP levels leading to pre-specified 10-year HF risk of 10% in each BMI category at mean levels of all covariates: Download Ndumele Circ 2016.pptx 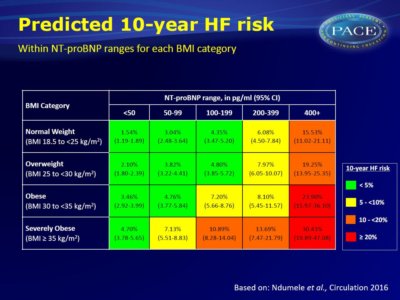 In a large community-based cohort with a long follow-up, NT-proBNP provided significant prognostic information regarding the risk of developing HF even among individuals with obesity, despite its inverse relationship with BMI. Due to the higher baseline HF risk among obese individuals, slight elevations in NT-proBNP may flag an increased absolute HF risk.