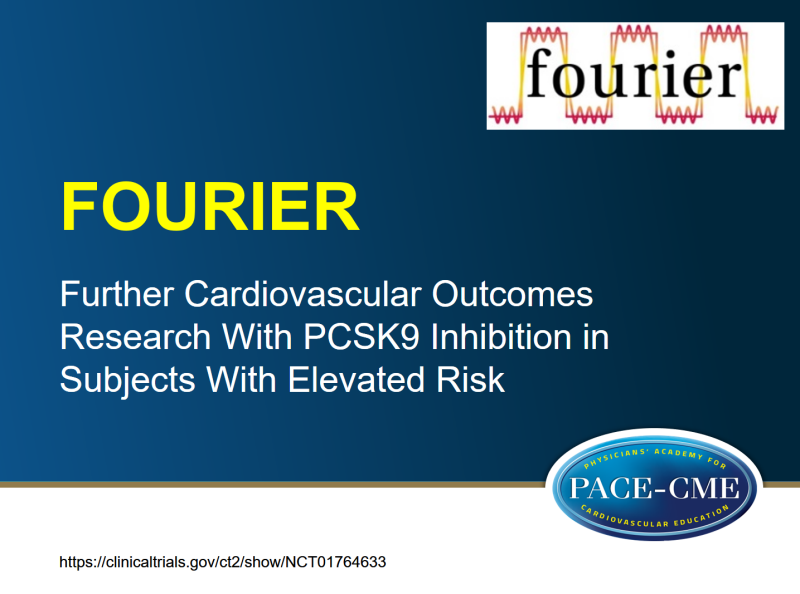 Simultaneously, it was reported that the EBBINGHAUS cognitive function trial conducted in FOURIER patients also achieved its primary endpoint, demonstrating that evolocumab was non-inferior to placebo for the effect on cognitive function.

Prof. John JP Kastelein about these results: "Because LDL-c levels were very low in the FOURIER trial, this shows how safe that is. The observation that both primary and secondary eindpoints showed positive results, means that CV mortality and stroke were also positive. That implies that lowering LDL-c levels also lowers the risk of stroke and mortality."

Evolocumab is a human monoclonal antibody that inhibits proprotein convertase subtilisin/kexin type 9 (PCSK9). Evolocumab binds to PCSK9 and inhibits circulating PCSK9 from binding to the low-density lipoprotein (LDL) receptor (LDLR), preventing PCSK9-mediated LDLR degradation and permitting LDLR to recycle back to the liver cell surface. By inhibiting the binding of PCSK9 to LDLR, Evolocumab increases the number of LDLRs available to clear LDL from the blood, thereby lowering LDL-C levels.

Evolocumab is approved in more than 40 countries, including the U.S., Japan, Canada and in all 28 countries that are members of the European Union. Applications in other countries are pending.

"In the GLAGOV study, we demonstrated that evolocumab has an effect on atherosclerosis, the underlying cause of cardiovascular disease. These FOURIER results show unequivocally the connection between lowering LDL cholesterol with evolocumab and cardiovascular risk reduction, even in a population already treated with optimised statin therapy," said Sean E. Harper, M.D., executive vice president of Research and Development at Amgen.

FOURIER (Further Cardiovascular OUtcomes Research with PCSK9 Inhibition in Subjects with Elevated Risk) is a multinational Phase 3 double-blind, randomised, placebo-controlled trial in approximately 27,500 patients who had either an MI, an ischemic stroke or symptomatic peripheral artery disease and an LDL ≥70 mg/dL or a non-HDL-C ≥100 mg/dL on optimised statin therapy. Optimised statin therapy was defined as at least atorvastatin 20 mg or equivalent daily with a recommendation for at least atorvastatin 40 mg or equivalent daily where approved. Patients were randomised to receive evolocumab subcutaneous 140 mg every two weeks or 420 mg monthly or placebo subcutaneous every two weeks or monthly. The study continued until at least 1,630 patients experienced a key secondary MACE (major adverse cardiac event) endpoint of cardiovascular death, MI or stroke, whichever occurred first. 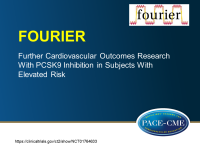 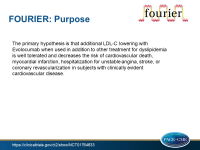 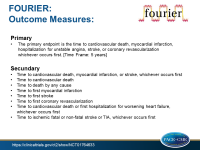 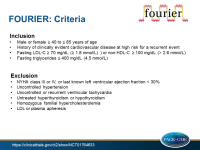 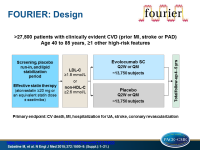 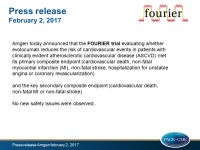