Temporal Trends in Incidence, Prevalence, and Mortality of Atrial Fibrillation in Primary Care

Almost every published study has demonstrated an increased incidence and prevalence of atrial fibrillation (AF), which is suspected to rise substantially in the next decades [1-7]. However, the majority of these observations included AF patients as part of cohort studies or AF registries, whereas data reflecting unselected clinical populations is lacking.

The aim of current study was to investigate temporal trends in AF incidence, comorbidities and mortality in a primary care population (UK Clinical Practice Research Datalink, CPRD GOLD, n=57 818, representing ~8% of the UK population), to get insight into the future AF population profile in the United Kingdom. The study population comprised adults with first incidence AF from 1998-2010.

The incidence of AF between 1998 and 2010 plateaued overall, but a continued increase was observed for patients >75 years and it was more common in men than in women. This number is expected to significantly increase towards 2060. Moreover, mortality in these older patients did not decrease as with younger patients, despite improvements in management. The increase will reflect a major public health burden in 2060 and will be accompanied by temporal changes in AF-related comorbidities. This suggests therefore the need for comprehensive implementation of AF prevention and management strategies.

7. Stefansdottir H, Aspelund T, Gudnason V, Arnar DO. Trends in the incidence and prevalence of atrial fibrillation in Iceland and future projections. Europace. 2011;13:1110–1117. 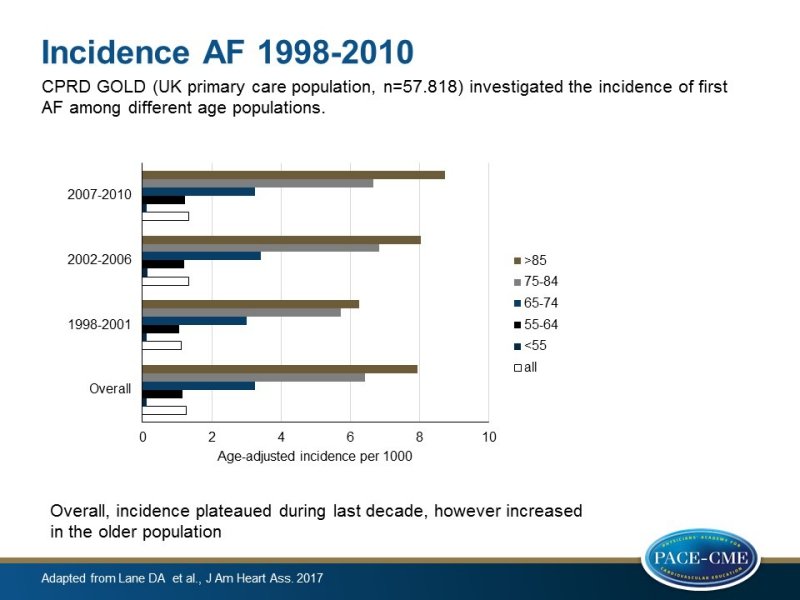