Aspirin is widely used for secondary prevention of cardiovascular (CV) diseases. A reduction of mortality in patients with a recent acute coronary syndrome (ACS) was also shown when using the non-vitamin K anttagonist (NOAC) rivaroxaban compared to placebo on a background of single or dual antiplatelet therapy (ATLAS ACS-2 TIMI 51 trial). Although rivaroxaban was accompanied with major bleedings, fewer were seen as compared with the anticoagulant warfarin.

Because of the clear superiority of the combination of rivaroxaban and aspirin, both monotherapy arms with rivaroxaban or aspirin alone were stopped early. Therefore, median follow up was 23 months (anticipated follow-up duration 3-4 years).

John Eikelboom noted that this regimen should not be compared with dual antiplatelet therapy, which is given on the shorter term post-ACS. This study focused on patients receiving aspirin for long-term secondary prevention.

In addition to these results of patients with coronary stable disease, this combination was tested in 7 470 PAD patients (COMPASS-PAD) for whom no pharmacological therapy has been shown to clearly reduce risk for major adverse CV events (MACE) or limb events (MALE) yet. These data were presented by Sonia Anand (Hamilton, ONT, Canada).

Also in these patients, the combination significantly reduced risk for MACE and MALE, including major amputation. Additionally, regarding MALE, event rate was highest for patients treated with aspirin alone, intermediate for rivaroxaban alone and lowest with the combination, compared to aspirin. Major bleedings were non-significantly increased for fatal or critical organ bleeding.

During the discussion in the press conference, Anand noted that in PAD, guidelines recommend single therapy as first line option, since dual therapy has not proven efficacy.

Results of the COMPASS-PAD trial will be published in the Lancet.

Download our slide set about this study Results of the COMPASS study have been published today in NEJM. 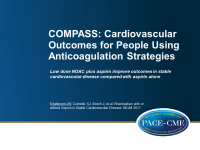 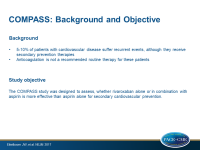 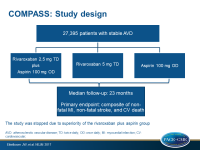 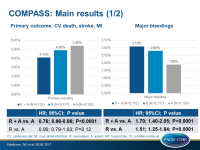 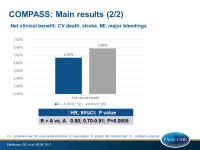 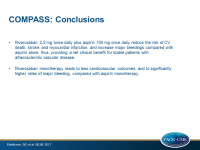