Meta-Analysis of the Safety and Efficacy of the Oral Anticoagulant Agents (Apixaban, Rivaroxaban, Dabigatran) in Patients With Acute Coronary Syndrome

Patients with acute coronary syndromes (ACS) are at risk of suffering recurrent major adverse cardiovascular events (MACE), particularly during the first few months post-ACS, even if they receive optimal dual antiplatelet therapy (DAPT) [1-3]. The new oral anticoagulants (NOACs) are effective and safe as stroke prophylaxis in non-valvular atrial fibrillation, but their antithrombotic potential after an ACS is less clear [4,5].

In this meta-analysis, the relative safety and efficacy of the NOACs rivaroxaban, apixaban, and dabigatran was evaluated, when added to single antiplatelet agent (SAP) or DAPT, in patients with a recent ACS. Seven randomized clinical trials reporting outcomes of interest (clinically significant bleeding and MACE) in adults with ACS met inclusion criteria : APPRAISE, APPRAISE-2, ATLAS ACS-TIMI 46, ATLAS ACS-TIMI 51, REDEEM, PIONEER AF and RE DUAL PCI. Patients on NOAC dosages causing a very high bleeding risk were excluded from the analysis, leaving:

The RE DUAL PCI (total N=1,743; dabigatran vs warfarin) enrolled only 50% patients with ACS, and was excluded from the secondary efficacy outcome as the study defined MACE differently. For this analysis, the International Society of Thrombosis and Hemostasis (ISTH) bleeding criteria were selected, and the Thrombolysis in Myocardial Infarction (TIMI) criteria were used only if ISTH criteria were not available.

In patients with recent ACS, addition of NOAC to single antiplatelet therapy did not result in excessive bleeding events or reduction in MACE. Addition of NOAC to dual antiplatelet therapy did result in a modest MACE reduction but led to an increased bleeding risk. Among NOACs, only rivaroxaban plus DAPT reduced the risk of MACE, and dabigatran plus SAP was the safest approach.

Download the slide Find this article online at Am J Cardiol 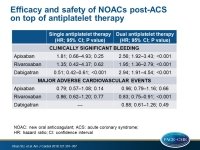