//APOC3// loss-of-function (LOF) mutations have been associated with a lower risk of ischemic vascular disease (IVD), as well as with lower triglyceride, apolipoprotein CIII (ApoC3), and very LDL-c levels [1-4].

This study evaluated whether the low IVD risk in APOC3 LOF heterozygotes can be explained by the low plasma remnant cholesterol and low LDL-c levels. For this purpose, the levels of remnant cholesterol and LDL-c were determined in APOC3 LOF heterozygotes versus non-carriers, by means of a meta-analysis of 8 study cohorts including 137,895 individuals.

Moreover, LDL-c levels of APOC3 LOF heterozygotes were compared with those of non-carriers in 75,725 individuals in the two prospective Danish general population cohorts (Copenhagen City Heart Study and Copenhagen General Population Study), and it was assessed whether lipid-lowering therapy masked the associations of LDL cholesterol with IVD. Moreover, the fraction of the observed lower IVD and ischemic heart disease (IHD) risk associated with APOC3 LOF mutations was calculated using mediation analysis by low remnant cholesterol and low LDL-c. 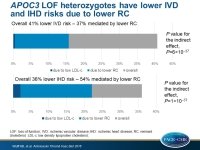