PCSK9 variants have no effect on the risk of stroke

Low-density lipoprotein cholesterol (LDL-c) levels have been associated with coronary heart disease (CHD) and with ischemic stroke (IS), but the latter relationship is not well established [1]. PCSK9 variants are useful to study the strength of association between LDL-c and IS.I

The effects of each variant on risk were examined separately and a weighted genetic risk score was constructed including only the two independent variants rs11591147 and rs505151.

Data from 3 genome-wide meta-analyses were used, which included 10,307 IS cases and 19,326 controls of European ancestry: the Global Lipids Genetics Consortium (GLGC) [10], the CARDIoGRAMPlusC4D Consortium [12], the METASTROKE Collaboration [13].

1. The Cholesterol Treatment Trialists’ (CTT) Collaboration. Efficacy and safety of more intensive lowering of LDL cholesterol: a meta-analysis of data from 170,000 participants in 26 randomised trials. Lancet 2010;376:1670–1681.

6. Ference BA. How to use Mendelian randomization to anticipate the results of randomized trials. European Heart Journal (2018) 39, 360–362. 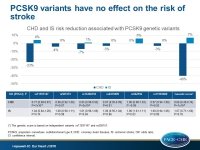