Six-Year Changes in Physical Activity and the Risk of Incident Heart Failure: The Atherosclerosis Risk in Communities (ARIC) Study

There are data showing that increases in physical activity (PA) over time are associated with lower risks of coronary heart disease (CHD) and total mortality, and that exercise training programs are beneficial for HF patients, but it is not known whether exercise training has an impact on HF prevention [1].

For this analysis, 11,351 participants without CHD or HF at baseline were included, and their PA was assessed using a modified interviewer-administered Baecke Questionnaire [3] at 2 visits, which were separated by approximately 6 years. PA was converted into a metabolic equivalent of task (MET) using the Compendium of Physical Activities, and classified into moderate (3-6 METS), and vigorous (>6 METS) exercise. A continuous variable of MET*min/week was generated using duration of PA per week and number of months per year. Based on the current American Heart Association (AHA) recommendations [4] PA levels were subsequently categorized as:

The primary outcome was incident HF defined as the first hospitalization or death related to HF.

Download the slide Find this article online at Circulation 2018 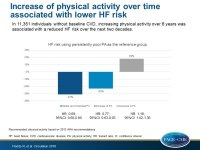