High body mass index (BMI) has been associated with similar or lower all-cause mortality rates compared with normal BMI, but the contribution of CVD to these results is not clear [1,2].

In this study, lifetime risk estimates of incident total CVD and subtypes of CVD, as well as years lived with and without CVD, were calculated by weight status.

Adults aged 20-89 years, without CVD at baseline, with available BMI and outcomes data, as well as a follow-up of at least 10 years, who were included in the Cardiovascular Disease Lifetime Risk Pooling Project [3] were eligible for the analysis, resulting into 190,672 person-examinations across the life course, with 3.2 million person-years of follow-up until 2015.

Download the slide Find this article online at JAMA Cardiol 2018 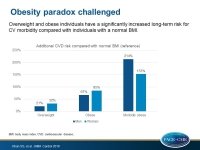