Novel subgroups of adult-onset diabetes and their association with outcomes: a data-driven cluster analysis of six variables

Diabetes is diagnosed based solely on glucose levels, and classified simply into type 1 and type 2. Current guidelines do not provide criteria for intensified treatment of patients at high risk for complications. However, diabetes has a heterogeneous clinical presentation and progression, and several rare monogenic forms have been described [2-4].

In this study, a data-driven cluster analysis of six commonly measured variables was performed in 14,755 adult patients with newly diagnosed diabetes, in order to optimize their classification and identify those at high risk for complications. Data of the Swedish All new Diabetics in Scania cohort (ANDIS) were used for the cluster analysis, and replication was performed in three independent cohorts (the Scania Diabetes Registry (SDR), All New Diabetics in Uppsala (ANDIU) and Diabetes Registry Vaasa (DIREVA)). The Malmo Diet and Cancer CardioVascular Arm (MDC-CVA) was used as a non-diabetic cohort to study genetic loci previously associated with diabetes and related traits, by comparing each of the clusters in the ANDIS cohort with the MDC-CVA cohort.

The following variables were related to prospective development of complications and prescription of medications:

Based on the ANDIS cohort, 5 clusters were formed:

In ANDIS, significant associations were observed between clusters and diabetic complications:

In a data-driven cluster analysis of six variables in adult patients with newly diagnosed diabetes, five categories of patients were identified with different characteristics and different risks of diabetic complications. These results suggest that a more precise stratification of new onset diabetes is possible and clinically useful, and it can provide information about underlying disease mechanisms. This allows individualization of treatments according to risk of complications. 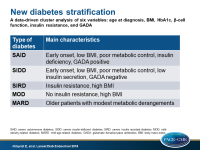