The degree of adverse outcomes in patients with coronary heart disease (CHD) due to cigarette smoking differs between individuals. Smoking modifies the effect of the top single-nucleotide polymorphism (SNP) rs4977574 at the chromosome 9p21 locus, which is the strongest CHD associated locus. Data show that smoking attenuates the increased risk for CHD associated with having 1 or 2 risk alleles [1], but interaction between smoking and a polygenetic risk score (PRS) for CHD has not been tested.

In this study, associations between smoking and incidence of CHD stratified by PRS were investigated, in order to understand, whether smoking interacts with PRS for CHD. Furthermore, it was evaluated whether genetic prediction of CHD differs according to smoking behavior, and interactions between each of the CHD-associated SNPs and smoking on the risk of CHD were tested.

The Malmö Diet and Cancer Study is a population-based prospective study that recruited 30,447 subjects between 1923 and 1950 [2-4]. Baseline data were collected between 1991 and 1996. Subjects with prevalent CHD, those with missing data on smoking, and missing or bad quality DNA were excluded, leaving a study population of 24,443 individuals. Study participants were stratified into 3 smoking categories based on self-reported smoking status: never smokers, former smokers, and current smokers.

The increased CHD risk associated with smoking was higher in those with lower PRS than with higher PRS. The PRS for CHD provided better risk discrimination and reclassification on top of traditional risk factors among never smokers compared with smokers.

3. Wirfält E, Mattisson I, Johansson U, et al. A methodological report from the Malmö Diet and Cancer study: development and evaluation of altered routines in dietary data processing. Nutr J. 2002;1:3. 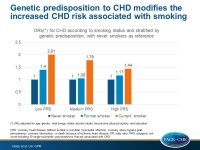