Chronic kidney disease (CKD) is characterized by vascular calcification and inflammation, and there is a need for specific treatments for this condition [1]. Apabetalone (RVX-208), an oral small molecule that targets the second bromodomain of bromodomain and extra-terminal (BET) proteins BRD2, BRD3, and BRD4, decreases atherogenesis, thrombosis and vascular inflammation, and is currently being developed for the treatment of CVD [2].

In this post-hoc analysis of the SUSTAIN and ASSURE studies, the effects of apabetalone on the levels of alkaline phosphatase (ALP) and the estimated glomerular filtration rate (eGFR) were evaluated, in patients with established coronary artery disease (CAD) and eGFR <60 mL/min/1.73m2.

Both trials enrolled patients with established CVD receiving standard of care therapy, including statins, who were randomized to receive either apabetalone 100 mg b.i.d. or placebo for a period of 6 months [3]. Out of a total of 499 subjects, 28 in the SUSTAIN study and 20 in the ASSURE study had baseline eGFR <60 mL/min/1.73 m2, and were included in this analysis. The Chronic Kidney Disease Epidemiology Collaboration equation was used to calculate eGFR [4].

In a post-hoc analysis that included 48 patients, apabetalone, a potential novel therapeutic approach for the treatment of CKD and CAD, had beneficial effects on ALP and eGFR. 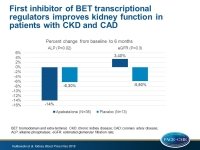