Homozygous FH is associated with premature CV death and major adverse cardiovascular events (MACE), with an average age of death of 18 years, if not treated [1-4]. Lipid-lowering therapy is recommended for these patients, however, there are no randomized clinical trials showing the benefits of this therapy.

In this retrospective survey, lipid levels and clinical outcomes were assessed in South African and UK FH homozygotes treated with various lipid-lowering measures between 1990 and 2014. For this purpose, 133 patients were included, who were alive and statin-naive at the start of 1990, and were retrospectively followed up until death or the end of 2014. The outcomes that were compared between groups were death from any cause, CVD death, and fatal plus nonfatal MACE.

Most patients were treated initially with maximal doses of simvastatin, or atorvastatin (after 1997), or rosuvastatin (after 2003), and more than 50% of patients received additionally ezetimibe from 2004 onwards. Other treatments were apheresis (from 1990), lomitapide (from 2008), and evolocumab (from 2012).

Patients were divided into 3 groups based on quartiles of on treatment total cholesterol (TC):

In their editorial article [5], Stoekenbroek, Hovingh, and Kastelein, comment that the findings of the study of Thompson et al are very convincing, despite the limitations of the study, including the limited sample size, the differences in patient characteristics, and the retrospective nature of the survey. They discuss several promising treatment options, including evinacumab, a monoclonal antibody targeting ANGPTL3 and not dependent on LDL receptor activity, gemcabene, which reduces the synthesis of hepatic cholesterol, triglycerides and apoC3, and finally gene therapy with a virus vector carrying the LDL receptor gene. The authors conclude: ‘HoFH remains a devastating disease and its consequences can only be limited by early initiation of multimodal treatment. The combination of high-dose statins, ezetimibe, and evolocumab has substantially improved outcomes for these patients, although even this combination enables only a minority of patients to reach acceptable lipid levels. Thompson et al. have now confirmed that the extent of therapeutic cholesterol reduction determines survival in HoFH patients. This conclusion underlined the need for a rigorous, multimodal treatment approach, often including apheresis, until the promising therapies which are under development become available.’ 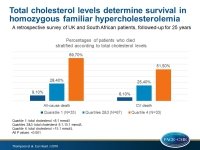