Acute respiratory tract infections are associated with a short-term increase in the risk of acute CV events [1]. Influenza virus and S. pneumoniae have direct myocardial effects and may exacerbate underlying atherosclerotic disease, however the effects of specific organisms is not clear [2]. A meta-analysis of data comparing influenza vaccine versus placebo in people with existing CVD shows a 36% reduction in the risk of major adverse cardiovascular events associated with influenza vaccination [3]. Moreover, the receipt of pneumococcal vaccine was associated with a modest cardio-protective effect [4].

In this study, the association between laboratory-confirmed respiratory bacteria or virus infections and risk of first myocardial infarction (MI) or stroke was quantified, using self-controlled case series analysis of anonymized linked electronic health records from Scotland in the UK.

For this purpose, the following data sources were used:

All individuals aged ≥40 years, with a hospital admission for MI or stroke from 2004-2014 were identified in the SMR01. All linked ECOSS records were searched for positive tests for influenza virus, parainfluenza virus, rhinovirus, respiratory syncytial virus, human meta-pneumo-virus or S. pneumoniae during the same study period. Individuals with a record of first MI or stroke and a record of at least one laboratory-confirmed respiratory infection were included in the analysis (N=1989).

Individuals with at least one laboratory-confirmed respiratory infection had a higher risk of MI or stroke, in particular when infected with S. pneumoniae or influenza virus. These results suggest that pneumococcal and influenza vaccines may be useful in the prevention of CV events. 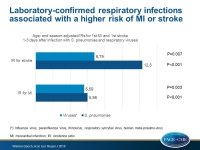