SGLT-2 Inhibitors and Cardiovascular Risk: An Analysis of CVD-REAL

Sodium-glucose co-transporter-2 inhibitors (SGLT2i) reduce CV risk in high risk type 2 diabetes mellitus (T2DM) patients [1,2]. The CVD-REAL (Comparative Effectiveness of Cardiovascular Outcomes in New Users of SGLT-2 Inhibitors) real world study showed that SGLT2i treatment is associated with a lower risk of death and heart failure (HF) compared with other glucose-lowering drugs (GLDs) [3], however it is not clear whether this association is independent on the presence of CVD.

The associations among SGLT2i, death, and HF were assessed according to the presence or absence of CVD at the time of initiation of glucose-lowering therapy in this analysis of the CVD REAL study. For this purpose, data from medical records, medical claims, electronic health and death records, and national registers were used, and adult patients with T2DM were identified.

Patients with type 1 or gestational diabetes were excluded from the analysis. Eligible patients were newly initiated on one of the SGLT2i canagliflozin, dapagliflozin, or empagliflozin, or other GLDs, and were matched 1:1 based on propensity scores.

Intention-to-treat analyses were done, starting at the beginning of glucose-lowering therapy until the first CV event or until the end of follow-up, and an additional on-treatment analysis served as a sensitivity analysis. Patients were stratified based on the presence or absence of established CVD, defined as a history of acute myocardial infarction, unstable angina, stroke, HF, transient ischemic attack, coronary revascularization, or occlusive peripheral artery disease. The primary endpoints included time to death, HF, and the composite endpoint of HF or death.

T2DM patients included in the real world CVD-REAL study had a lower risk of death and HF when treated with SGLT2i compared with other GLDs, regardless of the presence of CVD. These findings suggest that the CV benefits of SGLT2i therapy may apply for the whole class, and both for patients in primary and secondary prevention.

In their editorial article [4], Farkouh and Verma point at the consistency of the CVD-REAL results with those of other SGLT2i studies, like the EMPA-REG and the CANVAS programs, and they discuss the cardio-protective mechanisms of SGLT2 inhibition, including diuresis, natriuresis, glycosuria, pre- and afterload reductions, ketone metabolism, and direct myocardial effects, like improved diastolic function and left ventricular mass. The authors conclude: ‘We congratulate the authors for this important subanalysis, which continues to remind us of the importance of heart failure prevention in individuals with diabetes, while ushering hope that SGLT2i may be a preferred agent of choice in the prevention of one of the deadliest complications of diabetes……. Further insights from the CVD-REAL 2 study are also eagerly awaited. Whether SGLT2i will be useful agents in the treatment (vs. prevention) of heart failure with and without diabetes remains an important question for which ongoing studies are currently underway.’

2. Neal B, Perkovic V, Mahaffey KW, et al. Optimizing the analysis strategy for the CANVAS program: a prespecified plan for the integrated analyses of the CANVAS and CANVAS-R trials. Diabetes Obes Metab 2017;19:926–35. 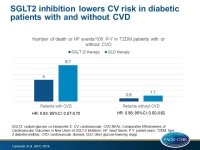