Myocardial injury after non-cardiac surgery (MINS), defined as myocardial infarction (MI) or troponin elevation within 30 days after surgery, is independently associated with an increased risk of CV complications and death in the first two years after surgery [1,2]. Dabigatran, an oral direct thrombin inhibitor, reduces the risk of thrombotic events in patients with MI and vascular disease [3,4], but it is not known whether it prevents vascular complications in patients with MINS.

In the investigator-initiated, international, randomized, placebo-controlled MANAGE trial [5], the potential of dabigatran to prevent major vascular complications in patients with MINS was evaluated. In the MANAGE trial, patients, aged ≥45 years, who had elevated troponin with ischemic signs or symptoms, ischemic electrocardiographic changes, new or presumed new ischemic abnormality on cardiac imaging, or isolated elevated troponin without an alternative explanation to ischemic myocardial injury after non-cardiac surgery were included. Patients with a hemorrhagic disorder or those who required anticoagulation due to prosthetic heart valve, venous thromboembolism, or atrial fibrillation, as well as patients with a contraindication to anticoagulation therapy and those with an estimated glomerular filtration rate <35 mL/min were excluded from the study.

Patients were randomized in a 1:1 fashion to receive dabigatran 110 mg orally twice daily or placebo, and patients not taking a proton-pump inhibitor were also randomly assigned (1:1) to omeprazole 20 mg orally once daily or placebo. Patients were followed up for a maximum of two years. The primary efficacy outcome was a composite of vascular mortality, non-fatal MI, non-hemorrhagic stroke, peripheral arterial thrombosis, amputation, and symptomatic venous thromboembolism. The primary safety outcome was a composite of life-threatening, major, and critical organ bleeding.

Myocardial injury was identified by troponin screening in the majority of patients who had undergone non-cardiac surgery. These results suggest that routine troponin measurement is justified in patients undergoing non-cardiac surgery. Anticoagulation therapy with dabigatran was associated with a lower risk of major vascular complications in these patients, without an increased risk of major bleeding. 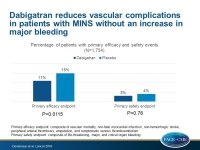