Longer exposure to hypertension in mid-life increases risk of dementia

Association between systolic blood pressure and dementia in the Whitehall II cohort study: role of age, duration, and threshold used to define hypertension

Although lowering blood pressure (BP) in older adults does not influence the risk of dementia, data show that hypertension in mid-life is associated with an increased risk of dementia later in life [1-3]. In relevant studies however, ‘mid-life’ ranged from 35 to 68 years, hypertension was identified based on use of antihypertensive medication rather than on BP measurements, and the threshold of 140 mmHg was used for systolic BP (SBP), although lower SBP targets are required to reduce the risk of cardiovascular disease (CVD) [4,5].

Individuals with hypertension at mid-life, defined as SBP ≥130 mmHg at the age of 50, have an increased risk of dementia, independently of the presence or absence of CVD. Interestingly, this association is seen below the conventional 140 mmHg threshold used to define hypertension. The risk increases with longer exposure to hypertension, but hypertension in late life is not associated with dementia risk. 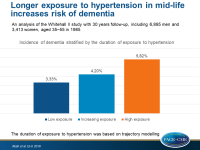