MEDI0382, a GLP-1 and glucagon receptor dual agonist, in obese or overweight patients with type 2 diabetes: a randomised, controlled, double-blind, ascending dose and phase 2a study

Weight loss improves glycemic control and reduces cardiovascular risk in overweight and obese patients with type 2 diabetes (T2DM) [1]. Existing glucose-lowering medications have a neutral effect on weight, or lead to a modest degree of weight loss, whereas bariatric surgery leads to effective glycemic control, but is associated with adverse effects and high costs [2,3]. MEDI0382 is a dual GLP-1 and glucagon receptor agonist, which is developed to improve glycemic control and to lead to clinically meaningful weight loss through insulin-tropic effects on appetite and energy expenditure. Although glucagon mobilizes hepatic glucose, another peptide with GLP-1 and glucagon receptor dual agonist activity was thought to promote normoglycemia through the equipoise of the two receptor activities. MEDI0382 is thought to partially mimic the hormonal environment after bariatric surgery, and in preclinical studies, it promoted more weight loss than GLP-1 receptor agonism alone [4].

This randomized, placebo-controlled, double-blind study, consisting of a multiple-ascending dose (MAD) phase, and a phase 2a, evaluated the optimal dosing regimen, efficacy, tolerability, and safety of MEDI0382 in overweight or obese T2DM patients. For this purpose, stable T2DM patients aged 18-65 years, with HbA1c of 6.5–8.5% at screening and a BMI of 27-40 kg/m² were recruited. Patients were randomly assigned to receive placebo or MEDI0382 once-daily subcutaneous before breakfast or after 8 hours of fasting. In the MAD phase of the study (N=61), 5 different study drug regimens were tested, ranging from 100 μg for 7 days to 300 μg for 22 days.

In the phase 2a part of the study (N=51), individuals received study drug at a dose of up to 200 μg for a maximum of 41 days or placebo in a 1:1 fashion, followed by a safety follow-up of 28 days. The endpoints were the percentage change in the glucose area under the curve at 0–4 h (AUC0–4 h) after a mixed-meal tolerance test (MMTT), and the change in body weight from baseline to the end of treatment. Moreover, the changes in fasting plasma glucose concentrations and HbA1c levels were assessed, as well as changes in liver fat, subcutaneous adipose tissue, and visceral adipose tissue. Adverse events were self-reported.

In their editorial article, Rayner and Horowitz [5] discuss the limitations of the Ambery et al study, which include that there was no active comparator as is common in early-phase trials, due to which it is unknown how much was gained by glucagon receptor agonism over stimulation of the GLP-1 receptors alone. The improvements seen in glucose levels and body weight were in the same range as those achieved by GLP-1 receptor agonists. Moreover, the main adverse effects were self-reported, and energy balance as well as liver inflammation and fibrosis were not assessed. The authors conclude: ‘The outcomes of the study by Ambery and colleagues support the ongoing development of MEDI0382, but a comprehensive understanding of mechanisms will be pivotal to successful therapeutic developments based on the gut–pancreas hormone axis. In this area, whether two (or more) will prove to be better than one remains to be determined’.

Download the slide Find this article online at The Lancet 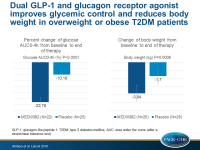