Nut consumption inversely associated with risk on AF and HF

This prospective study included 61,364 participants (aged 45-83 years) of the Cohort of Swedish Men and the Swedish Mammography Cohort who filled out the Food Frequency Questionnaire about their average nut consumption. The relation between nut consumption and the incidence of seven CVD was studied by combining this questionnaire with the Swedish National Patient and Death Registers.

Participants missing a personal identity number as well as those with prevalent CVD, cancer, an extreme energy intake and those who left the questionnaire unanswered were excluded.

Download the slide Find this article online at Heart 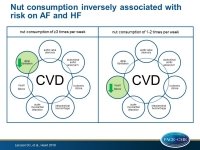