Cumulative Incidence of Hypertension by 55 Years of Age in Blacks and Whites: The CARDIA Study

Existing data show that blacks have higher blood pressure (BP) levels, an increased risk for hypertension, and a higher prevalence of hypertension compared with whites. Limited longitudinal data are available, however, to quantify the cumulative incidence (CI) of hypertension from young adulthood through middle age [1-3].

In this analysis of the Coronary Artery Risk Development in Young Adults (CARDIA) study [4], the CI of hypertension was assessed in black and white adults aged 18-30 years, who have been followed until the age of 55. Moreover, risk factors associated with a higher risk for hypertension were identified, which may prove to be meaningful goals for primordial prevention.

In CARDIA, 5,115 black and white individuals aged 18-30 years were enrolled between 1985 and 1986. For the current analysis, those with valid clinic BP measurements at baseline and during at least 1 follow-up examination were included, those who had systolic BP (SBP) <130 mmHg, diastolic BP (DBP) <80 mmHg, were not receiving antihypertensive treatment, and had no diagnosis of hypertension at the time of enrollment (N=3,890). Data on other risk factors were self-reported. The follow-up lasted 30 years. Incident hypertension was defined by the first visit with a mean SBP ≥130 mmHg, or a mean DBP ≥80 mmHg, or self-reported use of antihypertensive treatment.

Black individuals have a significantly higher risk of developing hypertension by the age of 55 compared with whites, from young adulthood through middle age, even in individuals with SBP/DBP <110/70 mmHg in young adulthood. The differences in incident hypertension emerged before 30 years of age, suggesting that early prevention should be considered for blacks at a young age.

In the editorial article, Brent [5] emphasizes the need and value of lifestyle interventions early in life, in order to decrease the risk for hypertension in black individuals. He also underlines that the 2017 ACC/AHA Hypertension Guideline recommendation to start antihypertensive medication for stage 1 hypertension may be more beneficial in blacks than in whites. He concludes: ‘Cost-effective and highly scalable approaches to healthy lifestyle patterns are urgently needed, especially in younger blacks. Because many blacks ≤55 years of age have 10-year CVD risk ≥10% or higher, effective pharmacotherapy should attenuate progression to more severe hypertension and potentially reduce cardiovascular events. Novel approaches to hypertension prevention, detection, treatment, and control may be required to improve health equity, given large racial differences in the age of onset, prevalence, and severity of hypertension.’

Download the slide Find this article online at JAHA 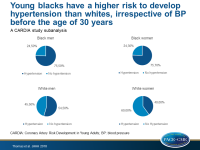