Atrial fibrillation (AF) is associated with an increased risk for ischemic stroke (IS) and thromboembolism (TE), but it is not clear whether the risk differs between patients with paroxysmal and non-paroxysmal AF [1,2]. This analysis of the Kaiser Permanente Real-World Heart Monitoring Strategy Evaluation, Treatment Patterns, and Health Metrics in Atrial Fibrillation (KP-RHYTHM) study [3] assessed whether a greater burden of AF is independently associated with the risk of IS and TE, in patients not on anticoagulation.

The retrospective KP-RHYTHM study included a large cohort of patients with paroxysmal AF, confirmed by continuous ambulatory electrocardiographic monitoring (AEM), lasting 14 days with the ZIO XT device (iRhythmTechnologies Inc). For this analysis, adult participants were selected, who underwent AEM between 2001 and 2016, and had confirmed paroxysmal AF, but were not on anticoagulation therapy. The burden of AF was quantified as the percentage of analyzable wear time spent in AF (minimum episode duration: 30 seconds, primary measure), and the longest continuous episode of AF during monitoring (secondary measure). The primary outcome was hospitalization for IS or TE.

In an analysis of the retrospective KP-RHYTHM study, a greater burden of AF, as measured by longer time spent in AF, was associated with a higher risk of IS and TE in adults with paroxysmal AF, who were not on anticoagulation. This finding was independent of known stroke risk factors. The duration of the longest continuous episode of AF during the monitoring period did, however, not predict thromboembolism.

In their editorial article, Steinberg and Piccini [4] discuss the strengths and the limitations of the study reported by Go et al. The strengths include the long duration of continuous monitoring, the fact that the results describe TE episodes when patients were not on anticoagulation therapy, and the good statistics. The limitations include the choice of one specific monitoring device, possible selection bias since patients had an indication for monitoring but not for anticoagulation, and the fact that the absolute number of events was low. The authors conclude: ‘In summary, the study by Go et al. makes an important contribution to our understanding of the risk of stroke in patients with paroxysmal AF: the burden or volume of AF does matter. It lays solid groundwork for a much-needed clinical trial among these patients with higher overall AF burden and low CHA₂2DS₂2-VASc risk scores.’

4. Steinberg BA, and Piccini JP. When Low-Risk Atrial Fibrillation Is Not So Low Risk. Beast of Burden. JAMA Cardiol. 2018;3(7):published online ahead of print.

Download the slide Find this article online at JAMA Cardiol 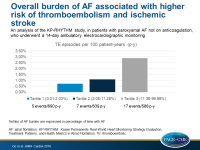