Efficacy and safety of semaglutide compared with liraglutide and placebo for weight loss in patients with obesity: a randomised, double-blind, placebo and active controlled, dose-ranging, phase 2 trial

The human glucagon-like peptide-1 (GLP-1) analogues liraglutide and semaglutide have been developed for the treatment of type 2 diabetes. Both drugs modulate appetite and energy intake, and have a positive effect on weight management on top of exercise and diet in diabetic patients [1,2].

This is a randomized, double-blind, controlled, dose-ranging phase 2 study to evaluate the weight-loss efficacy and safety of semaglutide given once daily for 52 weeks compared with an active-control (liraglutide) and placebo, in obese individuals.

Eligible participants were ≥18 years, without diabetes, and with a self-reported stable (maximum ±5kg within 90 days) body-mass index (BMI) of ≥30 kg/m². Furthermore, they had at least one previous unsuccessful non-surgical weight-loss attempt, and were free of major depressive symptoms (defined as a screening Patient Health Questionnaire-9 [PHQ-9] score <15). They were randomized 6:1 (active:placebo) to receive either semaglutide at one of five doses (0.05 mg, 0.1 mg, 0.2 mg, 0.3 mg, or 0.4 mg) or liraglutide (3.0 mg) as once-daily subcutaneous injections, or placebo. For each active treatment group there was a matching placebo group.

In obese individuals without diabetes, semaglutide at doses of at least 0.2 mg per day, combined with diet and exercise modification, resulted in dose-dependent body weight loss compared with placebo and compared with liraglutide 3.0 mg.

Download slide Find this article online at The Lancet 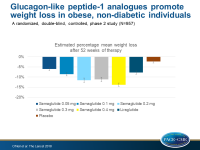