Lower VTE rate with DOAC in patients with cancer at risk for VTE, but more major bleeding

Apixaban to Prevent Venous Thromboembolism in Patients with Cancer

Patients with active cancer have an increased risk of venous thromboembolism (VTE), which leads to substantial morbidity and mortality [1-3]. The validated Khorana score may help to select patients with increased risk of VTE who could benefit from prophylaxis [4-7]. A small study has suggested that the use of the oral factor Xa inhibitor apixaban may be safe and effective in the prevention of VTE in patients with cancer [8]. Therefore, this trial aimed to establish the efficacy of apixaban thromboprophylaxis in ambulatory patients with cancer at risk for VTE.

The placebo-controlled, double-blind AVERT trial (Feb 2014 – Apr 2018) randomized 563 patients (aged ≥18 years) with newly diagnosed cancer or progression of known cancer after complete or partial remission, who were at intermediate-to-high risk for VTE (Khorana score of ≥2), to either apixaban (2.5 mg daily) or placebo in a 1:1 ratio before administration of a first chemotherapy, and followed them for a median duration of 183 days. VTE was defined as any symptomatic or incidentally detected proximal deep-vein thrombosis of the lower or upper limbs, any non-fatal symptomatic or incidental pulmonary embolism, and pulmonary embolism–related death.

The primary efficacy outcome was the first episode of major VTE within the first 180 days after randomization. The main safety outcome was major bleeding. 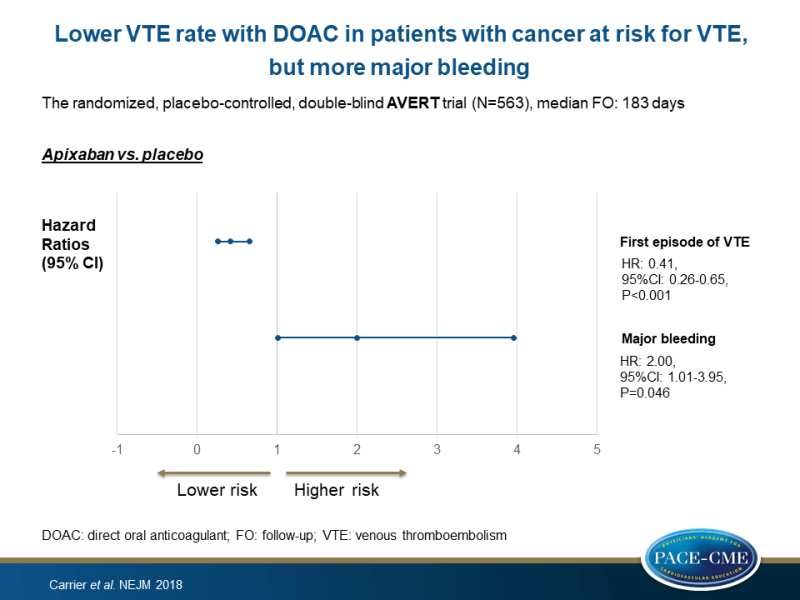 A randomized trial showed significantly lower risk of VTE during treatment with apixaban in ambulatory patients with cancer who were initiating chemotherapy and who had an intermediate-to-high risk of VTE, compared to placebo, however, more major bleedings were observed.

Download the slide Find this article online at NEJM