The validated PRECISE-DAPT (PREdicting bleeding Complications in patients undergoing stent Implantation and SubsequEnt Dual AntiPlatelet Therapy) score can predict risk of bleeding in patients on dual antiplatelet therapy (DAPT) after stent implantation. Stratification of patients based on this score has been shown to be useful to inform decision-making for duration of DAPT in stented patients [1]. However, more research is needed on validation of this prediction tool in various subgroups, including subjects at higher ischemic risk.

A longer than average duration of DAPT is often prescribed in those with extensive coronary artery disease necessitating complex percutaneous revascularization techniques [2]. This is in accordance with findings from retrospective studies that patients on long-term DAPT after complex intervention have higher absolute ischemic risk reduction than those who received short-term DAPT [3,4]. On the other hand, complex intervention is linked with features that significantly increase bleeding risks, such as multi comorbidities, renal disease, or previous bleeding.

This retrospective analysis of RCTs therefore focused on the mutual role of ischemic and bleeding risks on outcomes. Moreover, the authors aimed to assess whether long- or short-term DAPT should be prioritized in the setting of patients with both high bleeding and ischemic risk features. The study included 14.963 patients treated with percutaneous coronary intervention (PCI) and subsequent DAPT. Patients treated with coronary stenting in an elective, urgent, or emergent setting were pooled at an individual level from 8 RCTs. In 5 out of 8 studies, DAPT duration was randomly assigned and two studies followed duration as recommended in guidelines and one based duration (1-12 months) on patient characteristics. Short-term DAPT was defined as 3 or 6 months and long-term as 12 or 24 months DAPT with aspirin and a P2Y12 inhibitor. Participants were further stratified based on ischemic and bleeding risks. High bleeding risk (HBR) was defined as PRECISE-DAPT score ≥25. Predicted ischemic risk after PCI was quantified based on criteria of PCI complexity. Complex PCI (n=3.118) was defined as occurrence of ≥1 complex PCI criterion, according to guidelines for PCI complexity [3,5].

Clinical events with DAPT based on ischemic and bleeding risks

Impact of randomized DAPT duration according to ischemic and bleeding risks 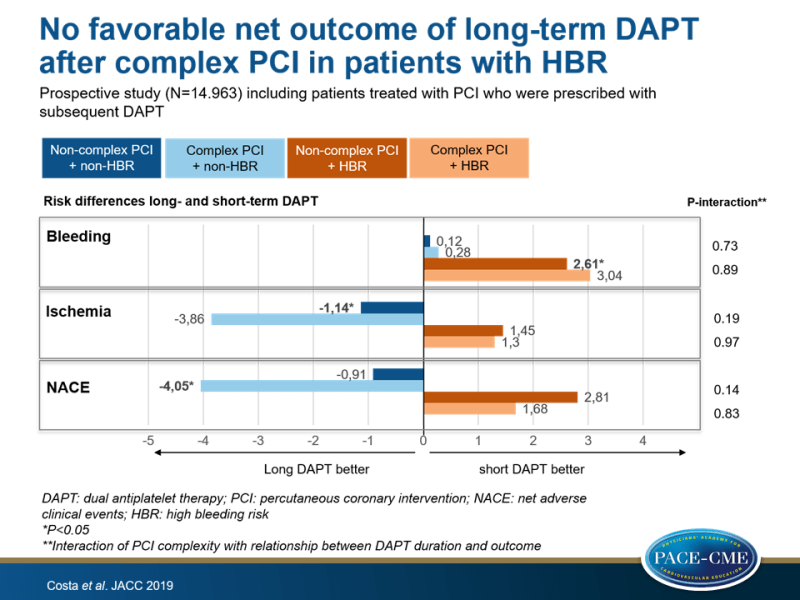 In this retrospective study of pooled data of RCTs, patients who underwent complex PCI had a higher risk for ischemic events compared with those with non-complex PCI. In patients without HBR, long-term DAPT duration was associated with reduced ischemic risk, especially in those with low PCI complexity. However, long-term DAPT did not result in additional benefit in patients with HBR features who underwent complex or non-complex PCI, which indicates an unfavorable net clinical outcome. These data suggest that when bleeding and ischemic risk are concordant, bleeding risk should inform decision-making on DAPT duration rather than ischemic risk.

Angoulvant et al. [6] raise the question why long-term DAPT did not reduce ischemic events in the population of patients with high bleeding and ischemic risks. The investigators of this study also discussed this issue and hypothesized that other antithrombotic agents might be more efficient in reducing ischemic events. The higher bleeding risk population had higher number of patients for every component of the CHA₂DS₂-VASc score and it is suggested that CHA₂DS₂-VASc score predicts stroke in CAD patients. Therefore, Angoulvant et al. hypothesize that the lack of prevention of stroke could have had a substantial contribution to the observed findings of no reduction of total ischemic events with long-term DAPT in this subpopulation. Angoulvant et al. continue by questioning the robustness of the PRECISE-DAPT score since it was retrospectively derived and raise the need for prospective evaluation of bleeding risk scores in future clinical trials. They conclude by saying that this study is ‘a major signal for interventional cardiologists willing to individualize post-PCI DAPT duration’, but that the suggested strategy by Costa et al. needs to be tested in a prospective randomized clinical trial. Furthermore: ‘In future trials, investigators may want to investigate alternative strategies, such as DAPT versus low-dose aspirin, combined with a low-dose factor Xa inhibitor.’