Better clinical outcomes with DOACs vs. warfarin in patients with NVAF and low body weight

Direct oral anticoagulants (DOACs) are convenient, safe, and effective alternatives to warfarin for stroke prevention in patients with atrial fibrillation (AF) [1-3]. Effects of DOAC treatment are closely linked to plasma concentrations, which are dependent on body distribution volume. Extremely low body weight may thus affect the efficacy and safety of DOACs [4].

DOACs are associated with better net clinical benefit than warfarin, which is mainly a result of fewer intracranial hemorrhages (ICH). However, being underweight has been linked to an elevated risk of major bleeding in patients treated with DOACs. It remains unknown whether DOACs have similar beneficial effects in patients with low body weight, especially in those with extremely low body weight (<50 kg).

This nationwide cohort study therefore retrospectively compared the effectiveness and safety of DOACs with those of warfarin in Asian patients with non-valvular AF and low body weight. All patient data were obtained from the Korean National Health Insurance Service (NHIS) (n=50 million) and the National Health Insurance Corporation Health checkup database. Eligible patients (aged ≥20 years) had low body weight (≤60 kg) and newly prescribed warfarin (n=7.576) or DOAC (rivaroxaban, dabigatran, apixaban, or edoxaban, n=14.103) between January 2013 and December 2016, who did not have a history of ischemic stroke, ICH, or gastrointestinal (GI) bleeding. To balance the baseline characteristics between the warfarin and pooled DOAC groups, a weighting method based on propensity scores was used. Subanalyses were performed on for groups based on weight, DOAC dose and label adherence. Median follow-up was 1.2 years.

Clinical outcomes in the total population with low body weight 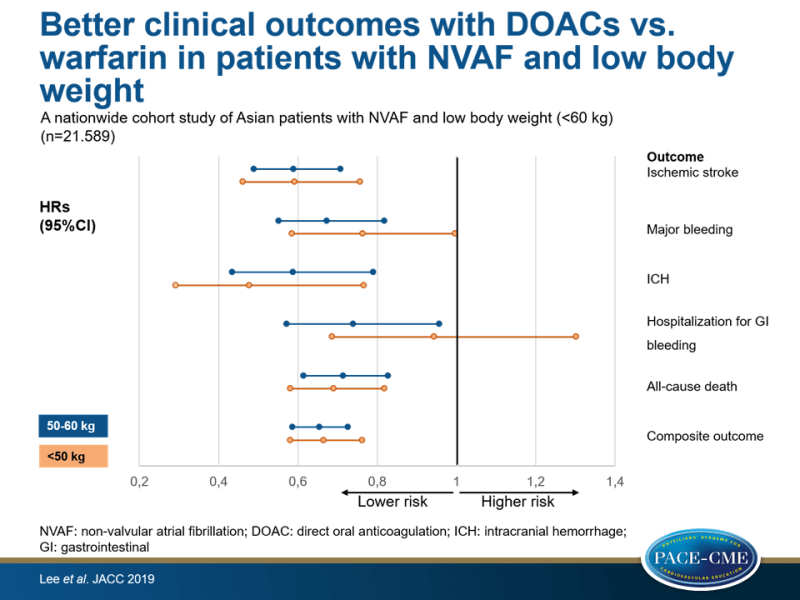 In this real-world Asian population with non-valvular AF and low body weight, DOAC use showed better effectiveness and safety compared with warfarin. This observation was consistent in patients with extremely low body weight (<50 kg), except that they showed more hospitalization for GI bleeding. Similar results were obtained in those receiving reduced doses of DOACs, compared to participants on regular DOAC dose, irrespective of body weight.

In his editorial comment [5], Verheugt mainly focusses on DOAC dose in patients with AF. He explains that dose reductions are available on the drug labels for each DOAC. The therapeutic window of DOACs is small. He emphasizes: “A major problem is that inappropriate underdosing may lead to excess stroke and/or mortality, whereas overdosing can cause excess bleeding”.

In the study of Lee et al., inappropriate underdosing was seen most often with rivaroxaban (52%), followed by apixaban (35%), while this was not common with dabigatran and edoxaban. The dose reduction on the labels for apixaban and edoxaban is 50%, and that of dabigatran and rivaroxaban is 25%. Although these differences might have consequences for inappropriate dosing per DOAC, off-label underdosing did not result in worse outcomes in the current study. A recent review warned that DOACs might be linked to more bleeding and higher mortality in AF patients weighing <50 kg, but these novel observations mitigate such fears.

Next, Verheugt takes a closer look at the study design. A strength of the current study is the large number of patients with low body weight and that data are obtained from a national health database that are usually reliable and complete. However, he also emphasizes some limitations. First, the study originated from a registry, with its inherent shortcomings. Second, the investigators did not mention the INR and time in therapeutic range (TTR). In the current study, quality of warfarin management was lacking, ‘making the DOAC results an easy winner’. Third, the distribution of DOACs was not equal, with very little use of edoxaban (8% vs. 24% - 43% of the other DOACs). This makes the results of edoxaban versus warfarin questionable and the comparison between DOACs almost impossible. Finally, a great number of patients (62%) received reduced DOAC dose, whereas in the four pivotal DOAC trials, it varied from 5% with apixaban to 21% with rivaroxaban, 25% with edoxaban, and 50% (by design) with dabigatran. These data make it hard to compare with clinical practice, especially in the Western world. Only for edoxaban, a low body weight is the only criterion for dose reduction. For patients taking apixaban, there must be an additional feature for dose reduction: age >80 years and/or serum creatinine levels >1.5 mg/dL. In contrast, body weight does not play a role in prescription of dabigatran or rivaroxaban.

Verheugt concludes that dosing with both warfarin and DOACs is crucial, and that additional characteristics of patients with AF have to be taken into account in selecting patients that are eligible for DOAC dose reduction. “Although the current study is reassuring that DOACs can be used in AF patients with low to very low body weight, we must take into account that the study results originate from a region where low body weight is common. Because of this characteristic, the results do not necessarily apply for such patients in the Western world.”