The ST2 receptor, present as soluble (sST2) and transmembrane (ST2L) isoforms, is a member of the interleukin 1 (IL-1) receptor family [1]. Circulating sST2 levels are elevated in patients with acutely decompensated heart failure (ADHF). Elevated sST2 levels are an established predictor of worse prognosis [2,3]. It has been suggested that sST2 functions as a decoy receptor that can sequester IL-33 and thereby prevents the cardioprotective interaction of IL-33 with ST2L. Via this route, it may contribute to HF progression [4].

IL-1β plays a central role in inflammation and is found mainly in the circulation, where it is produced by activated macrophages. This cytokine negatively affected myocardial remodeling and function in experimental models [5], but little is known about the role of IL-1β in patients with HF. Inflammation is a main characteristic of HF progression, but anti-inflammatory treatments against some cytokines have not been effective [6]. ST2 and IL-1β are both involved in the IL-1 axis, but their relationship remains unclear. This observational study therefore assessed the potential relationship between sST2 and IL-1β, and the prognostic impact of such a relationship in patients with ADHF.

Data were obtained from a prospective registry that included 316 consecutive patients with a diagnosis of ADHF who received usual care. ADHF was defined as rapid or gradual onset of signs and symptoms of HF leading to unplanned hospitalization, including new-onset acute HF or decompensation of chronic HF. Blood samples were collected upon arrival at the emergency department in order to measure sST2 and IL-1β levels. The established prognostic threshold of 35.0 pg/mL for sST2 was used. IL-1β levels ≥49.1 pg/mL were determined in this study to be the optimal cut-off points for predicting death. Participants were divided into four groups based on IL-1β and sST2 levels: sST2 <35 ng/ml and IL-1β <49.1 pg/ml (low-low); sST2 ≥35 ng/ml and IL-1β <49.1 pg/ml (high-low); and sST2 ≥35 ng/ml and IL-1β ≥49.1 pg/ml (high-high). There were no observations of sST2<35 ng/ml and IL-1β ≥49.1 pg/ml (low-high). The primary outcome was all-cause mortality at 1 year, which was obtained from the National Insurance and Death records. 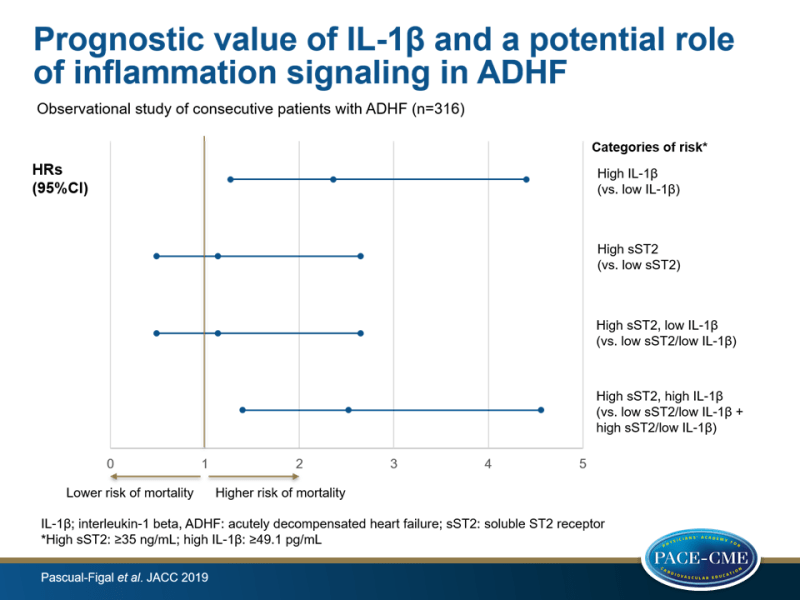 This observational study showed prognostic value of the IL-1β cytokine for ADHF in those with high sST2 levels, and a meaningful correlation between IL-1β and sST2. These data suggest an interplay between IL-1β and sST2 in the pathophysiology of ADHF and that available treatments targeting IL-1β may have clinically beneficial effects in these patients.

The study conducted by Pascual-Figal et al. is novel in showing a significant correlation between IL-1β and sST2. However, ’these results should be considered exploratory and hypothesis generating’, Everett and Siddiqi note in their editorial comment [7].

Nonetheless, the current study raises several thought-provoking questions. First, how is the prognosis and clinical course of patients with HF altered by the biology of the IL-1 signaling system, including the ligands IL-33 and IL-1β? Second, can risk prediction for HF be improved by measuring levels of sST2 and IL-1β? Finally, can therapeutic targeting for patients with HF be improved by measuring IL-1β and sST2 levels? To date, no trials of therapy guided by other established biomarkers have shown improved outcomes in patients with HF.

The authors explain that using the biomarkers IL-1β and sST2 to guide treatment decisions may have beneficial effects, since experimental models have suggested a relationship between the inflammatory pathways marked by IL-33/ST2 and/or IL-1β and the development and progression of HF. Moreover, some small studies evaluating the effect on surrogate endpoints, have already shown clinical improvements after inhibition of the IL-1 signaling system in HF. Moreover, exploratory results of the CANTOS trial also suggested a beneficial effect of IL-1β inhibition for patients with HF.

They conclude that for now, the clinical applicability of the data obtained in the current study is, however, limited. Although ST2 is an established marker of prognosis in patients with HF, no established risk prediction tools are available as yet that incorporate clinical information and biomarker data. Nevertheless, the reported biological interactions between the IL-1β/IL1R and IL-33/ST2 signaling systems hold promise for our understanding of the role of inflammation in the development and progression of HF. “Perhaps, with time and further scientific exploration, we can harness these inflammatory mechanisms for the prognostication, stratification, and treatment of heart failure”.