Causal association of LCL-c with ischemic stroke and intracerebral hemorrhage

Despite lower LDL-c concentrations in Chinese populations, stroke incidence and intracerebral hemorrhage (ICH) proportions are higher in China, compared to Western populations. The link between LDL-c levels and both stroke types remains unclear. Observational data have demonstrated weaker positive associations of LDL-c with ischemic stroke (IS), compared to coronary heart disease (CHD) [1,2], while LDL-c lowering trials have shown similar risk reduction for IS and CHD [3-5]. Mendelian randomization studies of LDL-c and IS have reported contradictory data [6-8]. Concerns about the excess risks of ICH linked to lowering LDL-C [9,10] may have prevented the more widespread use of statins in China.

The China Kadoorie Biobank (CKB) study recruited 512.891 adults aged 30–79 years from 10 diverse areas in China during 2004–2008. First, the associations between biochemically measured lipids and brain image-confirmed stroke were assessed in a nested case-control study in the CKB, which included 5.475 individuals with IS, 4.776 with ICH, and 6.290 healthy controls (enrollment 2004-2008). For this nested case-control study, adults were selected who had no prior history of stroke, CHD, or cancer, and did not receive lipid-lowering, anticoagulant, or antiplatelet therapy at baseline.

Second, genetic analyses in the same nested population were done to study whether the association of LDL-c with risk of IS and ICH was causal. Based on results of Mendelian randomization trials, a genetic risk score (GRS) comprising 46 single-nucleotide polymorphisms most significantly associated with plasma LDL-c levels in the Global Lipids Genetics Consortium [11,12] was calculated for each CKB participant. 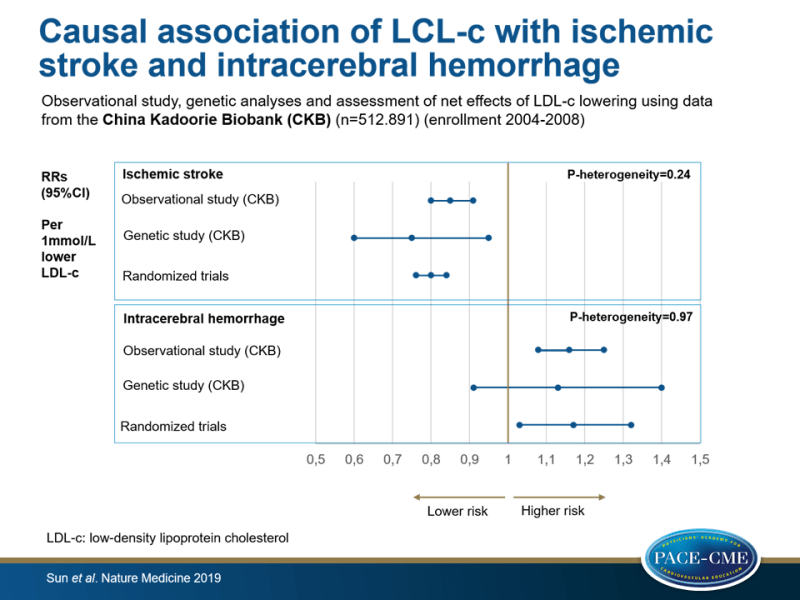 LDL-c was positively associated with IS and equally strong inversely associated with ICH in a study including a large number of brain image-confirmed IS and ICH cases in Chinese populations without prior history of chronic disease or statin use, which was confirmed by genetic analyses in the same population and by a meta-analysis of LDL-c-lowering trials consisting of mostly Western populations. The findings suggest net benefit for the prevention of overall stroke with lowering LDL-c in a Chinese population with high stroke rate, for both primary and secondary prevention settings.

Download the slide Find this article online at Nature Medicine