Antibiotic exposure is suggested to be associated with imbalanced and changed composition of gut microbiota [1-3], which is linked to cardiometabolic abnormalities [4]. Use of macrolide antibiotics has been shown to be positively linked with CV and sudden cardiac death [5-16].

A meta-analysis found higher risk of sudden cardiac death, ventricular tachyarrhythmias, and CV mortality with macrolide antibiotic use (for 3 days to 1 year) [5]. Another study showed increased risk of myocardial infarction (MI) during 2 weeks after initiation of clarithromycin treatment, compared to amoxicillin, but this risk was not increased between 2 weeks to 3 years after initiation of antibiotic use [16]. Also, a meta-analysis found an association of macrolide antibiotics and adverse CV outcomes for a short follow-up duration (<30 days), whereas this association was not significant with a longer follow-up duration (>30 days to >3 years) [7]. These data suggest weakening of the adverse CV effects of antibiotics over time.

To date, longitudinal data on the link of antibiotic exposure time in different phases of adulthood with CVD incidence in a population at usual risk are lacking. This study therefore examined associations of duration and life-stages of antibiotic use with CVD risk over 8 years, using detailed information on cumulative antibiotic use during adulthood from the Nurses’ Health Study (NHS).

The NHS is an ongoing cohort study that included 121.701 female registered nurses in the USA in 1976, who were 30-55 years old at enrollment. Information on demographic and lifestyle factors, medical history, and disease status were self-reported. In the current study, baseline data on antibiotic use were obtained from the 2004 questionnaire (n=90.853). In total, 57.726 women reported data on antibiotic use during young (age 20-39 years), middle (age 40-59 years) and late (age >60 years) adulthood. Exclusion was based on history of MI, angina pectoris, stroke and cancer, leaving a study population of 36.429 female participants. Participants were stratified based on self-reported total antibiotic exposure time: short-term use (none, <15 days, or 15 days to 2 months) or long-term use (≥2 months) for each phase of adulthood. Study outcome was incident CVD, defined as a composite of CHD (non-fatal MI or fatal CHD) and total stroke (non-fatal or fatal). Mean follow-up duration was 7.6 years.

Antibiotic exposure time in different life-stages and risk of CVD 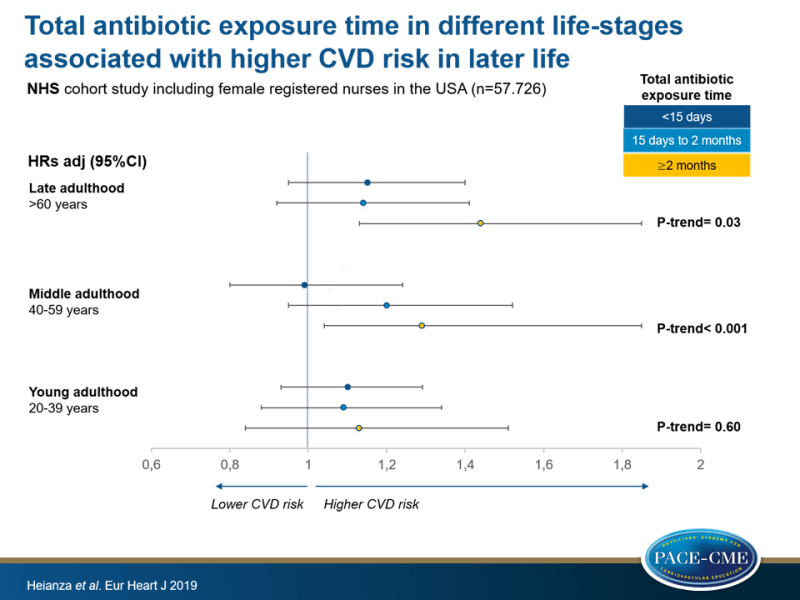