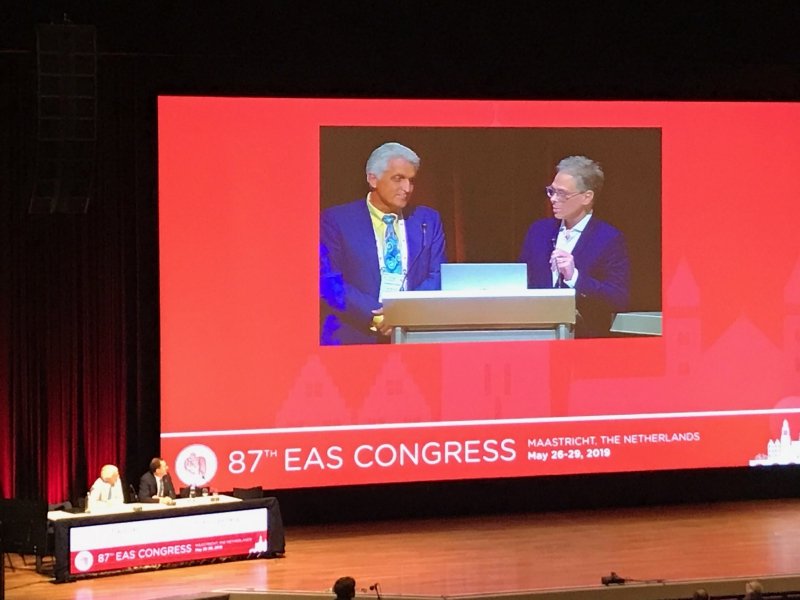 Debate on Lp(a) – treating high levels or not?

Scroll down to give your opinion on this topic

Professor Brian Ference (University of Cambridge, United Kingdom) was assigned the title and the accompanying position in the debate: “Don’t treat high Lp(a)”. On his first slide, he added between brackets “at least, not at the moment” to the title. He admitted that he would not have chosen this position, but he was happy to challenge the existing ideas.

Thus, to defend the “do not treat”-position, he demonstrated that the holes in the evidence already appeared at the beginning of clinical studies into Lp(a). Observational evidence suggested that tripling in Lp(a) level gives about 16% higher risk, whereas tripling in LDL-c level gives 386% higher risk. Thus, the conclusion was that Lp(a) is a weak risk factor for CVD, and that attention should be directed to LDL.

If there is a relation, is it causal? Mendelian randomization studies indeed showed a dose-response effect of exposure to alleles associated with higher Lp(a) on the risk of coronary disease, suggesting causality. Ference noted that causality is merely a threshold issue. In line with that, we need to estimate how much we have to lower Lp(a) to get a clinically meaningful effect.

Lp(a) levels show a highly skewed distribution in the population, such that the vast majority (80%) of people have levels below 50 mg/dL. Very large reductions of Lp(a) are likely to yield meaningful risk reductions. Estimates on clinically meaningful reductions vary from ~50 to 200 mg/dL. How much the Lp(a) level should be lowered precisely, also depends on the assay used to measure the lipoprotein. Ference noted that, if we do not know how to accurately measure Lp(a), how can we recommend treating its high levels? Moreover, when looking at the distribution of Lp(a) levels in the population, most individuals will not benefit from Lp(a) lowering: only those with very high levels may. Ference pointed out that in European Heart Journal, a EAS Consensus panel set the desirable level of Lp(a) at <80th percentile , which corresponds to <~50 mg/dL. He challenged the notion of this threshold, as it suggests a linear relationship between Lp(a) levels and risk.

Other will say, Ference continued, that evidence shows that lowering Lp(a) indeed lowers risk. But, he showed data of the HPS2-THRIVE trial, in which niacin lowered Lp(a) by about 25-30%, with no treatment effect on the composite of CV death, MI or stroke. Similar observations were done with CETP inhibitors in ACCELERATE and REVEAL, which led to about 25% reduction in Lp(a), but did not impact the clinical outcome of CV death, MI and stroke. Others may say that this is irrelevant and point at findings of the PCSK9 inhibition trials. Ference said: first we need to understand the context.

In the ODYSSEY trial on PCSK9 inhibition with alirocumab, the authors noted an interaction of treatment effect on absolute risk reduction, with quartiles of Lp(a). And then they concluded that a higher relative risk reduction was seen with greater reductions in Lp(a), up to 20.0% with 20 mg/dL. This, however, he called a nonsensical analysis, because Lp(a) levels are not related to absolute risk; it is about the proportional changes. Later, the authors published a revised model, based on which they concluded that 42 mg/dL decrease in Lp(a) is needed to get a 20% relative risk reduction. This is, however, accompanied by a huge 95% confidence interval: 17-367 mg/dL. This is what we refer to as a wild guess, Ference noted.

He continued by noting that the lowest Lp(a) quartile showed a reduction of 1.4 mmol/L, but no benefit. If you believe these data, then you need to conclude that PCSK9 inhibition has no benefit, unless you also lower Lp(a). He called the authors of this Lp(a) analysis “transparently biased”: because if the first quartile is disregarded, then there is no trend across the other quartiles. Still, people will say: Lp(a) has magical properties.

He ended the defence of his position by summarising that Lp(a) is only weakly associated with the risk of CV disease. Very large absolute reductions in Lp(a) are likely needed to produce clinically meaningful reductions in risk, thus only a small minority of patients have the potential to benefit from lowering Lp(a). To date, there is no evidence from randomized trials that therapeutically lowering Lp(a) reduces the risk of CV events. Therefore, at the moment we should not treat Lp(a), but instead we should focus on reducing LDL-c and other apoB-containing lipoproteins to most effectively reduce CV risk for the majority of people.

As a last thought, he added that we should not incorrectly conclude that Lp(a) is not important. He really thinks that Lp(a) is an important causal risk factor for CVD. He thinks there should be worldwide screening for Lp(a) to identify people with extreme elevations who may have an inherited risk of CVD equivalent to people with heterozygous FH. It is furthermore extremely important to design pivotal CV outcome trials evaluating novel Lp(a)-lowering therapies in patients with very high baseline Lp(a), to achieve very large therapeutic absolute reductions in Lp(a).

Professor Sotirios Tsimikas (UCSD, San Diego, CA, USA) was asked to defend the “We should treat high Lp(a)”-position. As a quick reply to Ference’s talk, he joked that Lp(a) is magical, but so are statistics… It is important to note that many of the analyses that he showed were done in primary prevention populations, whereas the clinical trials will be in secondary prevention.

He started out by showing 10 take home messages on why to treat Lp(a), namely:

In addition, he noted that Lp(a) is not associated with risk at a monogenic level, but maybe at a polygenic level. Tsimikas is not sure that it is a causal relationship. He called Lp(a) a triple headed monster: it has all proatherogenic properties of LDL-c, but also thrombotic and inflammatory effects. Thus, looking at the whole pathophysiology, it is harder to predict what the effect of lowering this particle will be. Only looking at the effect of its cholesterol content will not be enough.

Addressing some of the take home messages in more detail, he noted that if we think that Lp(a) is an important risk factor, then we should check it. Ference already showed the data to support messages 2 and 3. Associations between Lp(a) level and CVD risk in patients treated with statins have been demonstrated in seven landmark trials. The associations were independent of established risk factors. Importantly, it has been shown that when LDL-attributable risk is reduced with statin treatment, Lp(a)-associated risk becomes an even stronger predictor of residual risk, especially when Lp(a) exceeds 50 mg/dL. Measuring Lp(a) has also been demonstrated to enhance risk prediction at the bedside.

It is important to realize that LDL-c is not LDL-c as most of us think of it. When assessing the LDL-c concentration, this consists of LDL-c and the cholesterol contained in Lp(a). Moreover, the percent cholesterol content in Lp(a) depend on the size of the kringle repeat in Lp(a): cholesterol content varies between 30 and 45%. Thus, it would be better to report a lipid profile as the different cholesterol-containing components: total cholesterol = LDL-c + Lp(a)-c + VLDL-c + HDL-c.

About PCSK9 inhibitors, he noted that many were excited about the drop in Lp(a). But these were % changes, which amounts to little in most people, as they have low levels. The Anitschkow study indeed showed that PCSK9 inhibitors are poorly effective at lowering Lp(a): it did not reduce arterial wall inflammation.

The debate was chaired by professors John Chapman and Florian Kronenberg. After the presentations, they raised the issue that different mechanisms can trigger events, as several pathophysiological processes act in parallel. Thus, there may be specific patients, at specific phases in their disease, that may benefit from therapy. A question to Tsimikas was how they are going to dissect out the differences in clinical trials? If one does not look at the right moment or at the right type of events, the treatment effect may be diluted. Tsimikas answered that with AKCEA, they indeed try to match therapy to the pathophysiology of disease. People with recent MIs, stroke, peripheral artery disease or very high Lp(a) levels, with otherwise controlled risk factors, are relevant to study. Not patients with stable disease.

What do you think?